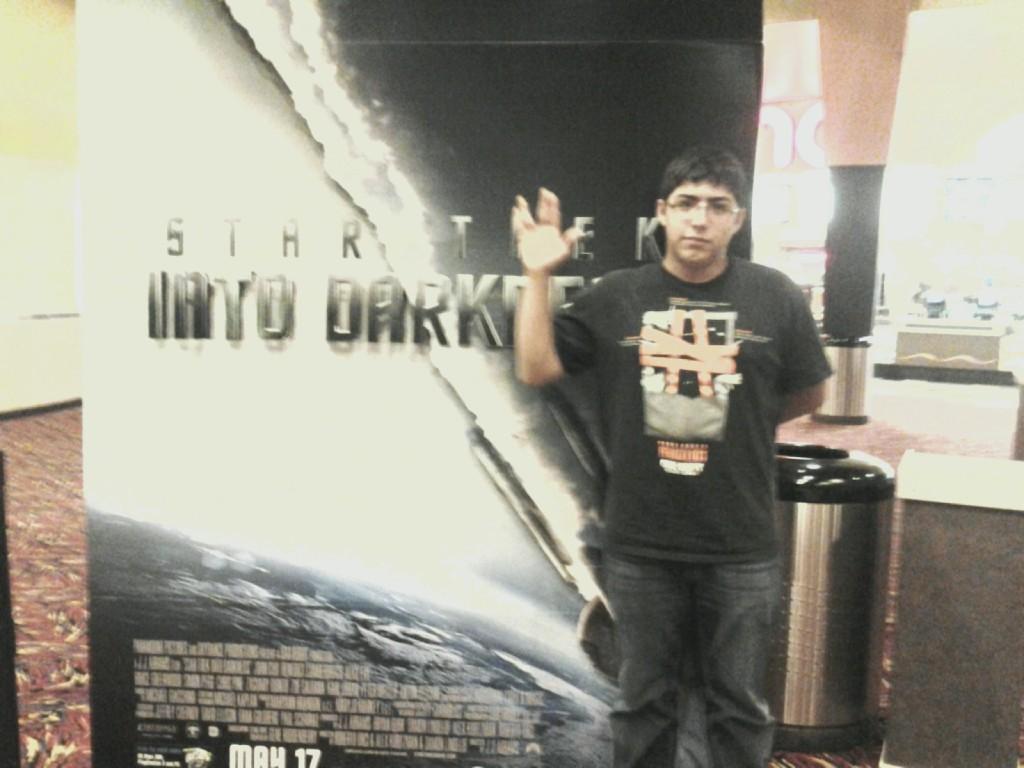 Before I begin, let me say that “Star Trek: Into Darkness” was an awesome movie and I loved every second of it. That being said, the majority of the film was pretty much taken from the original series and its movies. This isn’t bad, but instead of coming up with their own creative idea for the film, Bad Robot decided to mine the series for its best scenes. Although the movie definitely appeals to Trekkies more than regular moviegoers, I still would have liked a little more originality.

The film begins on the planet Nibiru, which is home to a primitive species who have barely invented the wheel. Kirk and the crew are trying to stop a volcano from erupting that will kill off the entire species, and through a series of malfunctions Spock’s life is in danger. Kirk must break the Prime Directive – do not meddle in the destiny of other species – in order to save him. Because of this rule-breaking, the Enterprise is taken away from Kirk. A wrench is thrown into the entire process when a man named John Harrison executes a terrorist attack on the Starfleet offices, causing half of the higher officers to die. When Harrison flees to the Klingon homeworld, newly reinstated Captain James Tiberius Kirk must risk total war with the Klingons and find him.

I won’t spoil the rest of the film, but it is a wild ride that contains so much action and conspiracy there is barely any time to digest what just happened. The film also seems to have been directed by M. Night Shyamalan on steroids, because there are so many plot twists it’s almost ridiculous. However, all the characters play their parts brilliantly, from Spock’s trademark emotional detachment to Bones’s bitter attitude towards everything. Along with this, the film references the original series many times and the entire plot of the film is centered around the plot of a previous Star Trek film. Moviegoers who have seen the original series will predict where the movie will go; however, it still throws in some surprises that I personally did not expect. It has the best musical score I have heard in a while, and every time I hear the new theme song I get a chill down my spine.

The writing in this film was great, giving characters, most notably Scotty, funny lines when the time is right, but seriousness when it is needed. Kirk and Spock both grow in this film, changing Chris Pine’s Kirk from an immature rebellious kid in the first film, to a man truly fit for the captain’s chair, and giving Zachary Quinto’s Mr. Spock a human half. Of course, due to my love for the original series every time Leonard Nimoy came on-screen I was thrilled, and when Spock meets with Spock you know something’s about to go down. However, the plot sticks so close to the source material that some of the lines are practically repeated verbatim from the original series. Some scenes were only really understandable to long-time fans, making me the only one in the packed theater laughing at certain jokes and remarks. Though the movie was great, I wish the filmmakers had taken a little more creative liberty with the film.

The newest addition to the cast, Benedict Cumberbatch, plays the villain in this film. His character of John Harrison is definitely one of the best Trek villains out there, along with Ricardo Montalban’s Khan and Eric Bana’s Nero. His vampire-like face and rich baritone give him this amazing sort of presence, and I enjoyed the tension he brought to his scenes. John Harrison is the sort of man who will save your life one second, then turn around and squash it out of you the next, and I love his character and the toll he takes on everybody else.

Another addition to the cast is Alice Eve as Dr. Carol Marcus, an important character in the Star Trek timeline. Although at first I thought her only role in the film was as eye candy (due to an otherwise pointless scene in the film where she is wearing nothing but her undergarments), she actually ended up as one of the more important characters in the film, and I’m interested to see how her character progresses in future installments.

“Star Trek: Into Darkness” is a great movie, and I would love to see where the series is going from here. Of course, with J.J. Abrams leaving the set to work on the next three Star Wars films, (as well as two origin story films), any future films most likely won’t be made with him in the captain’s chair. However, the ending of this film leaves the series open for not only another movie but a new television show as well, based off the familiar “five year mission to explore strange new worlds, seek out new life and new civilizations, and to boldly go where no man has gone before.”  The future of Star Trek is uncertain, but I would be perfectly happy to see a television show in the works. Overall, I would give this movie 9.5 suns out of 10, mostly because if you’ve watched the original series and are as big of Star Trek as I am, you will be jumping out of your seat with excitement every five seconds; in the end I would have liked to see a little more originality integrated into the film. “Into Darkness” does a good job of appealing to long-time fans as well as people who have never seen any Star Trek material that wasn’t made by J.J. Abrams. It is something that anyone can enjoy, and is most definitely recommended.