Now You See Me Movie Review 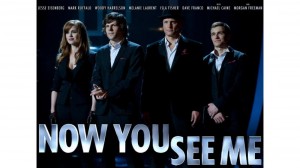 The hit movie of the summer, “Now You See Me,” made a big impact at the box office, hitting #2 and making over $29,350,389 during its opening weekend. The film is filled with suspense, action and most important of all, “magic.”

The movie is about a group of magicians  known as “The 4 Horsemen” who perform crazy heists under the cover-up of a magic show by following the directions of a mysterious leader whose identity remains unknown.

“Now You See Me” was panned as very well directed movie with a phenomenal cast, but I only partially agree with that. The movie did have some moments that were confusing and not very ‘well played out.’ I found myself spending half of the movie sitting there trying to understand what was going on instead of enjoying it. The movie would make you think one thing, while having  something completely different going on right under your nose.

Because of some of the misleading moments it would feel like a 3 star movie, but the rest of “Now You See Me” was probably one of the best action movies I have seen. The movie was hilarious but still had the dramatic scenes that make it a good action film. The movie does a great job of combining good elements from different genres, making it one of the best movies of the summer. Overall, I would give “Now You See Me” four stars for how it was written and the experience as a whole.