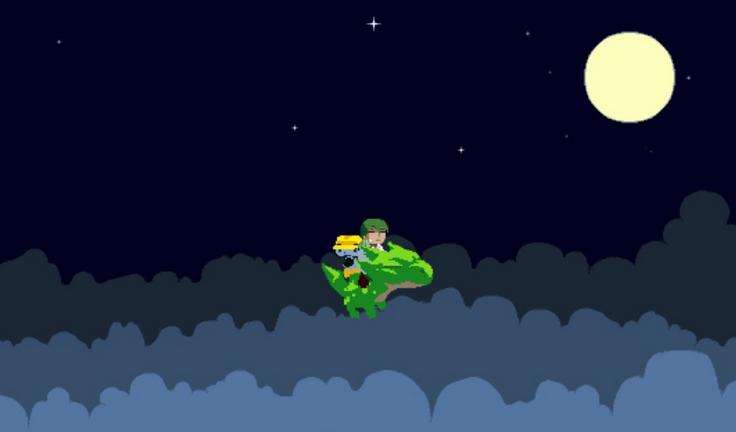 The protagonist and Kazuma from Cave Story seen on a flying dragon. Cave Story was a game indie game released by Pixel in 2004. Photo courtesy of Evan Rosser, Copyright © 2013 Evan Rosser.

Cave Story, or Dokutsu Monogatan, is a freeware platform-adventure indie game released in 2004 for the PC. The game was developed and self-published by Daisuke “Pixel” Amaya in his free time, and development of Cave Story lasted just over five years. After release, the game slowly gained popularity over the internet for its story, gameplay and sound. Later, the independent developer Nicalis would work with Amaya to bring a remastered version of Cave Story to Steam, the Nintendo 3Ds, and Nintendo Wii through out 2011 and 2012.

Most of Cave Story’s popularity comes from its homage to older classic 2D platformers, especially Nintendo’s Metroid. The game revolves around an amnesiac protagonist who awakens in a cave and sets off on a journey. Throughout his endeavors he encounters bunny like creatures known as Mimigma and a villain known as the Doctor who plans to use the Mimigma to conquer the world. You are then thrust into a quest to become the savior of this cave-like world, defeat the Doctor, and discover just who you are, all while trying to escape. This story is tied in with simple side scrolling, rapid shooting action, and begs for your attention. You can simply go through the game, lasers blazing, or look around and discover a deeper story with multiple endings.

Showing a vast amount of imagination in the game, and dedication by the one-man development team, Cave Story has managed to immerse many within its gameplay and story. Remakes published by Nicalis earned an 83/100 on Metacritic, and the original, being a freeware indie game, held no score, but generated a lot of positive feedback from the public. Cave Story is a wholesome game that if you allow yourself to be absorbed into its world you will find several hours of enjoyment. Or maybe you’re not in it for the story, but rather the gameplay. Either way Cave Story is a masterpiece of an indie game.