Divergent: One Watch Will Transform You 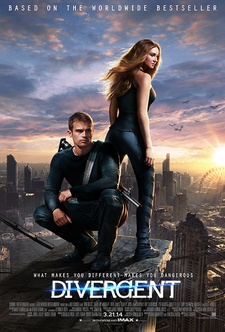 Divergent’s setting takes place in the future, where Chicago has turned into what its residents would call a utopia. Citizens are born into a faction–Abnegation, Amity, Candor, Erudite, or Dauntless–and at age sixteen, they take a test to tell which one you truly fit in to. Each person is supposed to only fit into one group, but variances do exist; these people are known as Divergents. These people are wired in a way as to defy the faction system and are not affected by the serums the government often uses to control the people. Divergents are seen as a threat to society because they have the ability to rise above the status quo and rebel against the active government. Beatrice ‘Tris’ Prior is a Divergent, and she’s learning how dangerous it is to be herself while adjusting to life in her new faction. (To know more about the plot, see the book review here.)

The two main actors, Shailene Woodley (Tris), and Theo James (male lead Four) have undeniable chemistry that you can see through the screen. However, I was pleasantly surprised and disappointed with these casting choices, all at the same time.

Shailene Woodley makes for a great Tris. She embodies the character and it is obvious that she has spent much time learning about her character. In fact, I may have liked Tris better in the movie than in the book. (Now, that’s a first.) However, Theo James isn’t quite Four to me. He is certainly likeable, with funny sarcasm and snide comments, but he is too masculine. Four is a very masculine character, but by the end, he’s supposed to be changed, softened. In the movie, the change is so slight, he is almost the same person, only now with a girlfriend.

I also felt that some of the personalities of the characters weren’t fully taken into consideration when the script was written. Peter, for instance, isn’t hostile enough. In the book, he is entirely power-hungry. In one part of the book, he stabs a competitor in the eye with a butter knife (which is left out of the movie–I assume to keep its PG-13 rating, as that scene may have been gory), but when he is taunting Tris in the movie, he doesn’t go far enough for his true character to be seen. He’s supposed to be a horrible person, not just a bully with a possibly reasonable backstory.

The sets and costumes from the movie are beautiful. The movie was really filmed in Chicago, where the story takes place. Locations and landmarks matched what the author, Veronica Roth described in the book; it was very believeable. The costume designer, Carlo Poggioli, had amazing designs. Since each of the factions have different looks reflecting their beliefs, I can imagine it being hard to design what each person would wear. But the clothes were stunning, and reflected each character’s essence perfectly.

Despite the character flaws, the movie was delightful. It had a great mix of action and romance that is hard to dislike. It captured the story’s main points, and to plot was, overall, the same. Most of the actors were perfectly casted, giving us the fun supporting characters we know and love. I look forward to see them act in other movies, along with the sequel “Insurgent,” which will be released on March 20, 2015.