Once again, the Liars and fans alike are left guessing after the winter special of “PLL,” but in the best way possible. Caution: possible spoilers. 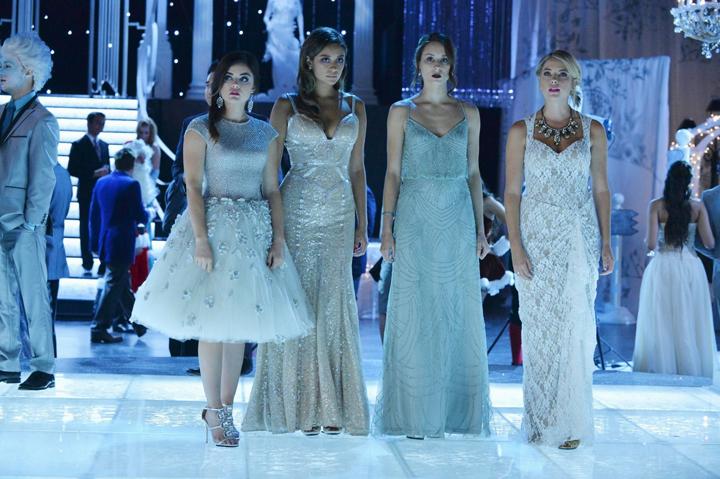 The Pretty Little Liars Winter Special premiered on 9 Dec. 2014. This picture is from the scene at the Christmas ball.

On December 9, 2014, ABC Family released the widely-anticipated winter special of the popular television drama series, “Pretty Little Liars.” The episode was titled, “How The A Stole Christmas” and picked up where season five left off in August. The Halloween Special in October did prove to be entertaining, but only involved cast members Lucy Hale (who plays Aria Montgomery), Ashley Benson (Hanna Marin), Troian Bellisario (Spencer Hastings), and Shay Mitchell (Emily Fields) answering questions and comments sent in from fans around the world. That being said, this episode came as a relief to everyone who had been desperately waiting since then.  Throughout the episode, there were suspenseful situations, plot twists, and even clear tension between the main characters. By the end of it, the director left you wanting more (as usual) and in anticipation of the the winter premiere beginning on 6 Jan. 2015.

The moment the “Pretty Little Liars” introduction began, you knew that you were in for a treat. The producers used a special seasonal opening with the characters wearing red and green nail polish in a snowy, winter-like scene. The appearance of the main characters sparked much excitement, considering that fans had been waiting a long three and a half months for the release of a new episode. More importantly, however, the introduction included a reflection of Mona Vanderwaal (played by Janel Parrish) in the eye of one of the dead characters who supposedly symbolizes Alison DiLaurentis (Sasha Pieterse). This is important because Mona was murdered in a previous episode, and it also represents Alison’s fear and attitude towards the situation.

The episode served as a continuation of the idea that Alison is “A” and that she is plotting a grand ending where she runs free and Aria, Hanna, Spencer, and Emily are left to take the fall for whatever crime is revealed. The girls, along with Ezra (played by Ian Harding), Caleb (Tyler Blackburn), and Paige (Lindsey Shaw), attend a Christmas ball hosted by Alison in order to infiltrate her house and learn about any secrets she might be hiding. All the while, Toby (Keegan Allen) is watching their every move from afar with his high-power DSLR camera, in order to make sure that nothing goes wrong. Nevertheless, the infamous black-hooded person manages to knock out Hanna and escape without being identified.

The episode is quite action-packed and is effective as a transition between the summer and winter seasons. As a longtime viewer of the series, I highly suggest that you watch the episode to ensure that you are ready for the coming season. Even though you are left with a number of unanswered questions, the episode is sure to please.