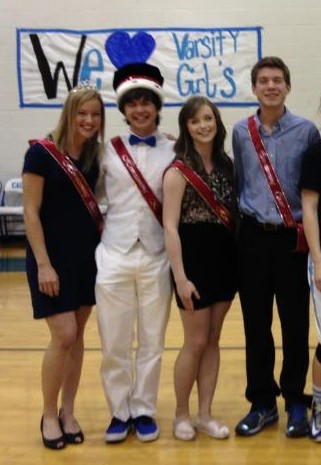 Homecoming Court is a prestigious honor bestowed on certain high school students who show values that the rest of the students greatly admire. These people are voted on before the Homecoming pep rally, and the nominees are shown at the pep rally. Finally the winners of each class are announced at the Homecoming games. This year the Senior 2013 Homecoming Court was as follows:

The Seniors were asked the following questions:
How did you feel when you found out you were nominated?
Owen: I was a little surprised and humbled, I didn’t expect my peers to nominate me, it’s comforting to
know I’m not too hated by my senior class.
Sam: I was pretty surprised I guess. I didn’t see it coming.
Mariah: I was really surprised and excited to be nominated!

Why do you think your peers nominated you for Homecoming Court?
Owen: I think it was because I was friends with a lot of people in my classes who were the ones to vote.
Sam: I have no idea. I’m not really involved in a lot at school so it’s sort of a mystery to me.
Mariah: I really don’t know why, a lot of people have told me that I’m really nice and sweet so maybe that was why I was nominated.

Overall, what are your feelings on being in the Homecoming Court for your senior year?
Owen: I appreciate the whole experience, and am honored to have been chosen. It was great fun and it’ll be a nice memory to hold on to.
Sam: I would have enjoyed Homecoming whether I was nominated or not, but I still feel dumbstruck and honored that so many people decided to vote for me.
Mariah: I’m really happy about it. It was such a great experience that I feel very lucky to have been a part of- it’s definitely something I will always remember.