The Eagles Land on Catalina Island 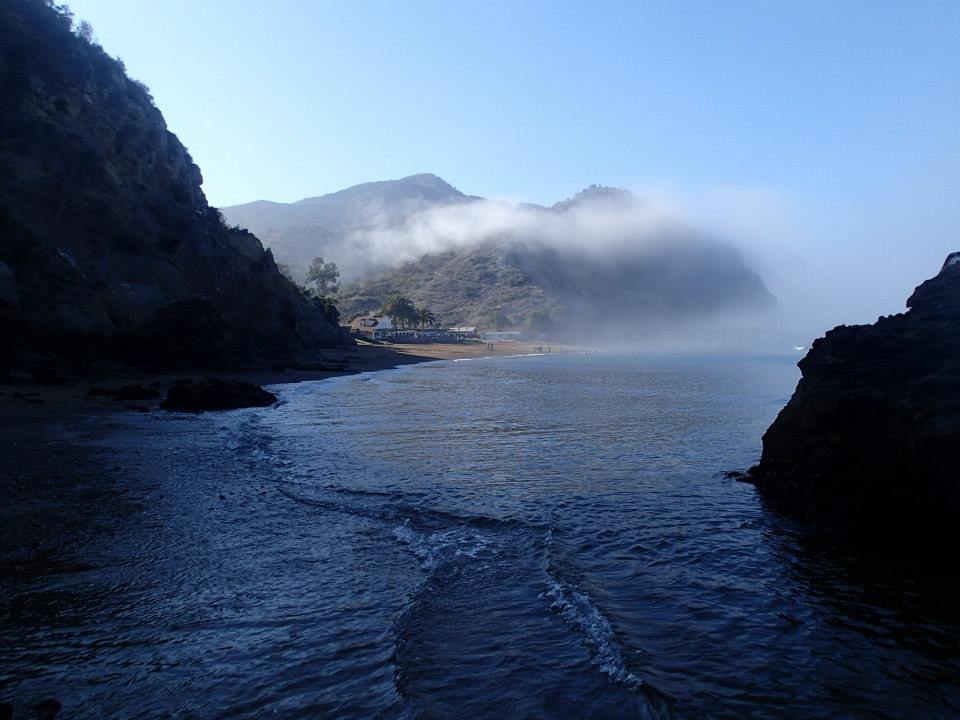 A photo of clouds wrapping around Catalina Island. Students had the chance to explore the shore and bay, as well as the inland mountains.

On October 18, around 12 pm, 37 students and four chaperones from Horizon Honors high school touched the shore of Catalina Island. Their day started off quickly when students were ushered into their dorms and placed into groups within an hour of being on the island.

Once in their groups, students were led to a number of labs, where they were led by instructors. One of the labs was a plankton lab, where students took a look at the microscopic life of plankton through a digital microscope and then sculpted plankton into the size and shape students think would most benefit plankton living in the ocean. There was also an invertebrate lab where students had the chance to touch many spineless sea animals such as sea stars, sea hares, sea cucumbers, and more.

After the labs, students had down time to get situated in their dorm and to walk around the island until dinner time. Each meal was designed to have a buffet of many options available for every student with or without allergies. Before and after every meal, a group was in charge of set up and clean up. The groups are switched every day, so each group helps out with different responsibilities.

Quickly following dinner was the squid dissection. Students were put into pairs and were given a squid to dissect while following the instructor’s lead. Each pair dissected the squid’s stomach and its internal organs in order to better understand its anatomy. This dissection concluded the first day, and then students went into quiet hour around 9 pm to get rest for the next morning.

Saturday was dedicated to the ocean with both a day and night snorkel. The day snorkel came after breakfast and lasted two hours. During the snorkels, the students were put back into groups and were led by their instructors to different parts of the bay. When junior Anthony Airdo was asked about the snorkel, he said that “At first really cold because of the water, and tight because of the wetsuit, but once adjusted it was nice. I saw a lot of sharks and had the chance to hold a sea hare which was really cool.”

As soon as the day snorkel concluded, students went to have lunch and then went to the rock wall that was back at camp. Students had the chance to climb the rock wall, which had many different levels of ranging from beginner to expert. After the rock wall, students rested and had down time to rebuild their energy for the night snorkel. Activities going on during down time included: beach volleyball and gaga ball, which is like dodgeball but in a round pit, and you have to aim for your opponents’ feet. After some down time, students had dinner and then hopped back into their wetsuits for a night snorkel. The night snorkel gave the students a chance to look at sea life they can’t in the day, and to touch bioluminescence in the ocean. Senior Alexandra Costabile described the night snorkel as,”Colorful because of the bioluminescence but a little disappointing that the bioluminescence wasn’t bright enough so I could see more sea life ”

Following the snorkel came a bonfire with hot chocolate and marshmallows for students to enjoy and stay warm. The bonfire last until about 10 pm and then students set off to their dorms so they could take a shower and go to bed.

Sunday marked the third and final day on the island. Students ate breakfast and then were asked if they wanted to go on another snorkel before they leave or to hike the island. A couple students chose to snorkel, but a good majority chose to go hiking. Once the snorkel and the hike were finished, students gathered their things and set off on the boat back home. Students and chaperones left the island at 12pm and made it back to the school around 10pm. Catalina Island is one of Horizon Honors’ best known annual trips, and students will hopefully continue to enjoy the island for years to come.