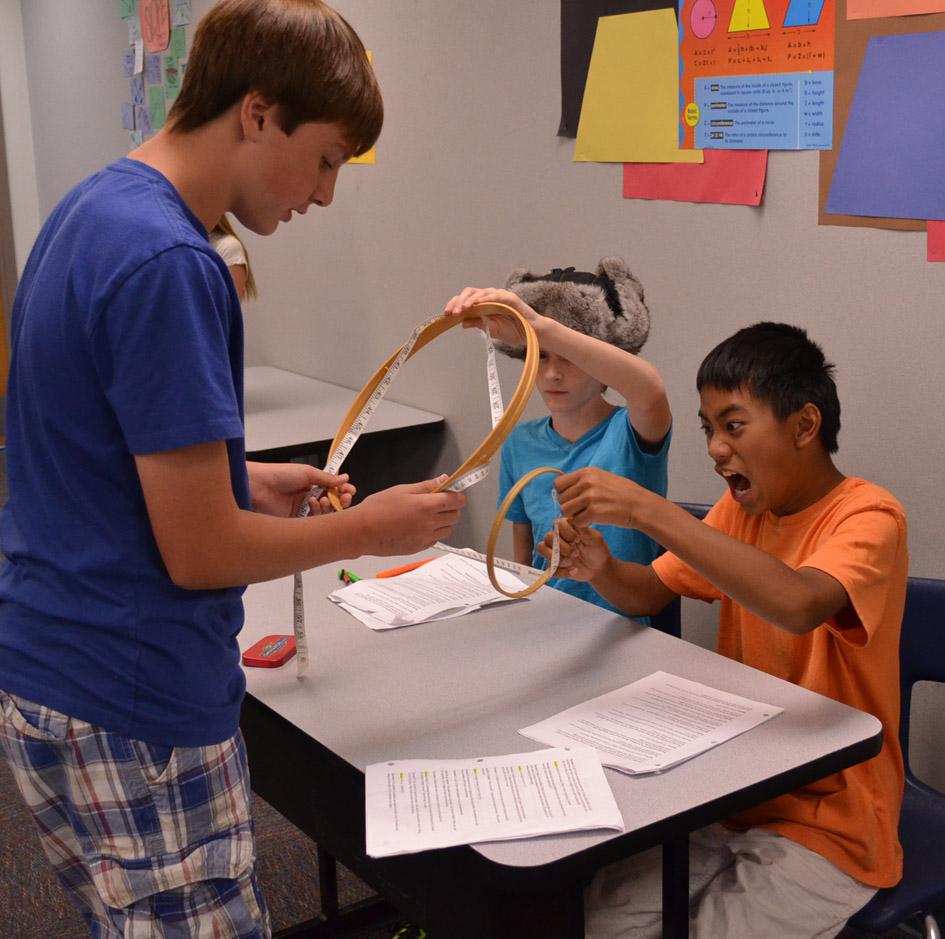 Mrs. Raitter takes some time to explain the importance of giving students varying perspectives on math and the impact it had on student learning and achievement.
What is the play about?
This is the story of how one day Sir Cumference develops a severe bellyache, and asks his son, Radius, to get him some medicine.  Radius finds some medicine, gives it to his father, and Sir Cumference immediately  becomes a fire-breathing dragon!The rest of the play follows Radius as he goes about finding a cure for his father.   He finds a strange-looking container and a set of spoons, accompanied by a strange poem that includes the phrases, “measure the middle and circle around.”  Not knowing what this means, Radius looks for help.  He finds clues in the doctor’s workroom, in the carpenter’s workshop, and in the kitchen.  He finally discovers the magic number: pi.

Radius discovers that the outside edge of a circle, the circumference, is 3 and 1/7 times as long as the diameter, the measurement across its middle, and that this is true for any circle.  He realizes that this is the key to the cure for his father.

Radius hurries off to rescue his father, measuring his dragon-father to be sure of the dosage.  Just in time (because the knights are coming to slay the dragon), Radius gives his father 3 and 1/7 spoonfuls of the medicine.  Sir Cumference immediately becomes a human again!

Sir Cumference declares that from that time forward, pie with an ‘e’ will be for eating.  Pi without an ‘e’ will be the name of this number for all things round.

All celebrate and eat pie (which is exactly what we did)!

Why a play in Math class?
My block 3/7 students are with me 5-6 more days in the 4th quarter than my other 2 blocks.  So in thinking about how to put this time to good use without leaving the other classes behind, I thought of the article that Dorene Healy sent out some months ago about using literature to teach math.  This reminded me of the play that Kathleen had shown me.

Working on a play is totally different than what the students typically experience in math, but the subject matter reinforces some knowledge they have been exposed to this year.  The combination of fun & different plus the relevance to their math knowledge seemed like a good combination, so decided to go for it.

The students were very excited about it when I first introduced the idea.  We used one period to assign parts, and two periods to walk through the play and get the idea of sequence and dependencies.  One student researched sound effects and came up with several that we worked into the play.  One was a chicken.  We needed a rooster to mark the dawn of the day, but decided a chicken would do.

What did students learn?
Besides the reinforcement of math concepts, the students experienced rehearsing, working with a script and with props, working on timing and cues, having fun, and ending up with a good result.

During our few days of work and rehearsal, the students who were engaged saw two contrasting dynamics:  When not everyone was on board and contributing, trying to accomplish anything was very frustrating.  By contrast, when everyone was attentive and doing their part, things worked out much better and the experience was satisfying for everyone.

Even with a very small play such as this, there were some opportunities for students to get a glimpse of what it takes to put together any kind of production.   I think it was a fun experience for them!… It certainly was different than most of our math classes.