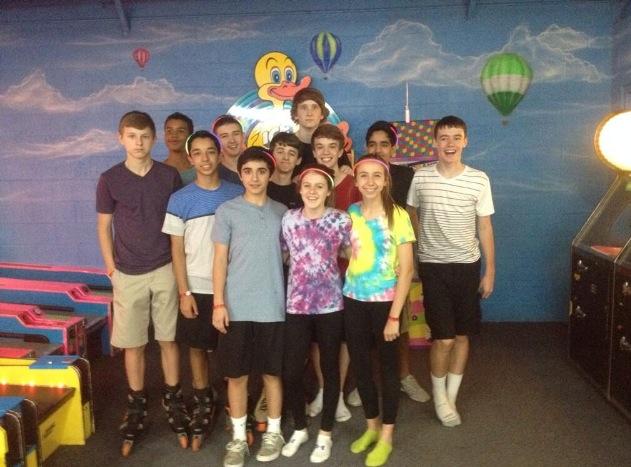 These students belong to Ms.Beets and Mr. Shand’s PE class on Blue days. Some students gathered around to take a picture at Skateland on Tuesday, May 6.

The middle school PE classes went on a field trip to Skateland on May 6 and 7. Both Ms. Beets and Mr. Shand’s classes participated in this event. Students spent the day skating and received unlimited drinks and pizza. It was said that the trip was a blast. Seventh grader Stephen McCollum stated, “Skateland was a great experience! I had a chance to hang out with all my friends. I have never been skating before so it had been a challenge but I soon got the hang of it!”

PE students started the day out by going to their first block class for attendance, and met in the high school courtyard at 8:15. The bus was filled with many buzzing students ready to spend the day skating with their friends. Once they arrived at Skateland, the students received their roller skates and then began to skate.

The music played, the lights flickered, and the room filled with energy. The faces of every student proved they were having a great time. Though a few people collided and wiped out, they got right back on their feet. Eighth grader Rachelle Trejo said, “ I fell many times but falling almost makes it more fun!”

As the fun day came to a close, the students spent their last few minutes doing the cha-cha slide on the skate rink, accompanied by Ms. Beets and Mr. Shand. Eighth grader, Roshi Patel said, “It was fun hanging out with everyone. It was a great experience!”