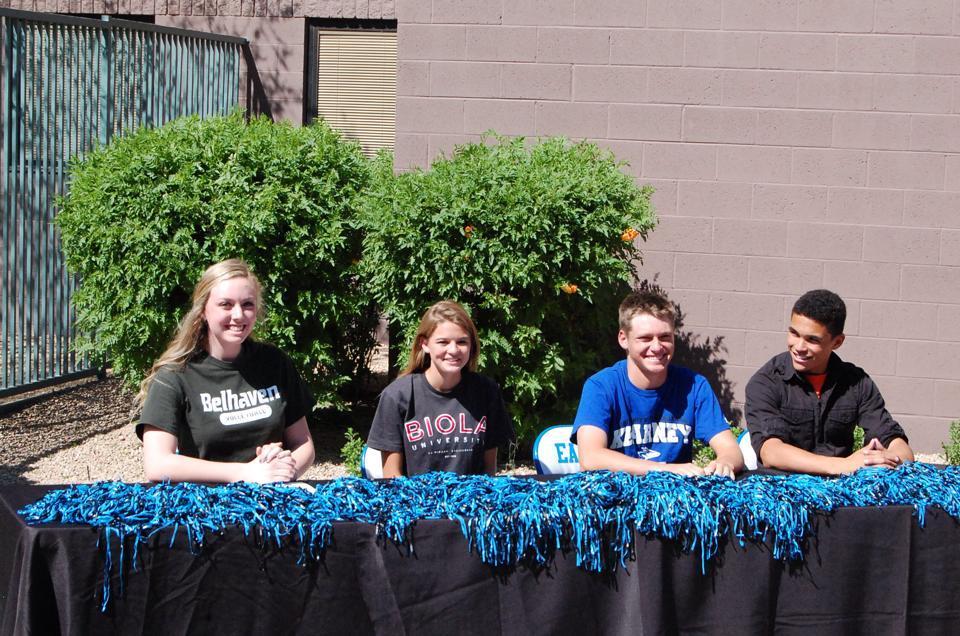 From left to right: Seniors Blaykleigh Smythe, Mikaela Martin, Chris Senna, and Connor Pendleton pose for a picture during their signing ceremony.

Horizon Honors athletes have drawn special attention to the golf, track, cross country, and volleyball teams this year. Seniors Chris Senna, Blaykleigh Smythe, Mikaela Martin, and Connor Pendleton have all signed to play these sports at four different colleges and were able to celebrate with their families and friends on April 16. The seniors were signed mid April Athletic director Nate Agostini states, “The signings were awesome. It was the most we have ever had at once. I am really proud; it takes a lot of work to play collegiate sports.”

What makes the signings even more special is that all four athletes are committing for sports which they played on Horizon Honors teams. “We have had students in the past get signed for sports that we don’t offer, like tennis and swim. We still honor it because it is a great accomplishment, but what is really neat is that these four sports, track, cross country, volleyball and golf are all played at Horizon Honors.”

Senna heads to the University of Nebraska at Kearney this fall as a golfer, Pendleton will run track at Occidental College in Los Angeles, California, Martin will run both track and cross country at Biola University in Southern California, and Smythe will attend Belhaven University in Jackson, Mississippi for volleyball.  “I’m really excited for next year!” said Martin. Also looking forward to attending university is Pendleton, “Next year will be amazing, I can’t wait to be running track again.”