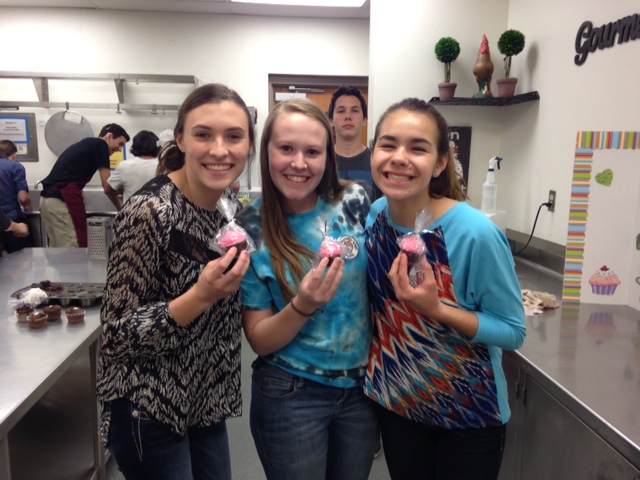 And the winner was...group one! Eagerly, the girls hurried to claim their prize. Each of the champions won a custom Cupcake Wars Champion pin, and chocolate cupcake. Although there was one winner, all teams did a fabulous job showing their creative cupcake talents!

Each team was judged on taste, presentation, and overall look. Get ready! This is Cupcake Wars. On Feb. 17 and 18, Mrs. Heinrich’s culinary classes participated in a cupcake competition. Three teachers were selected at random as judges and scored based on taste and presentation. The winner received a custom made button and model chocolate cupcake, a truly sweet prize.

Like any competition, this took some planning. A week prior to the competition, students gathered together with group members and browsed multiple cupcake recipes that stood out against their other competitors. Options varied from simple chocolate cupcakes to creative choices like a Cadbury Egg cupcake. Once students choose their recipe, they were asked to print copies for Mrs. Heinrich. She then made copies and assembled a massive list of ingredients for the big day.

After a week of waiting; the big day had arrived. Many students were nervous, some were eager, and all were hoping that their cupcake would take the cake and win the grand prize. As soon as they walked in the classroom, they hurried to start these complex confections. Mrs. Heinrich quickly explained the rules. It was simple, each group had a total of 55 minutes to bake, ice and decorate their cupcake and allow the judges to pick one winner.

Within 20 minutes, each group placed their batter in the oven. After quickly cleaning up, each group prepared decorations. Group one, made up of freshman Maggie Kenzler and sophomores Courtney Smith and Michelle Ogle made a chocolate mint cupcake. To decorate, they assembled mint chocolate chip squares and crushed a few to form a crumble. Junior Mary Hardiman and seniors Sean McElrath and Mack Heaslip were the second team. They added a vanilla filling and chocolate ganache to their chocolate cupcakes. Group three was made up of sophomores Alex Weixler and Aaron Tam, and junior Will Hughes. They made a cappuccino cupcake. Group four made the Cadbury Egg cake, made by freshman Macaria Likong and seniors Mikala Wescott, Jordan Lippens, and Lauren Lauzon. Last but not least was group five, myself, and freshmen Noah Ramirez, Jeremy Kollman, and Ritesh Mishra, with an Italian spumoni cupcake.

Time was ticking and with minutes flying by, the intensity was high. A final countdown from ten was set. It was anyone’s game as Mrs. Heinrich encouraged everyone to finish. Icing, decoration, plating, and DONE! It was then time for judging. Block four invited World History teacher Mr. Huber, seventh grade Humanities teacher Mrs.Wood, and Multimedia teacher Mrs. Cahill. Groups were each called to their cupcake before the judges.

Within the final ten minutes of class left, the judges stepped outside to debate the winner of the intense competition. Returning to class the judges announced final score. Block four’s top two finalists were group one and group five. The judges admitted although both cupcakes were excellent, one group’s icing fell short as a pool of chocolate syrup. And the winner of the block four 2015 first ever cupcake wars was…group one! Eagerly, the girls hurried to claim their prize. Each of the champions won a custom Cupcake Wars Champion pin, and chocolate cupcake.

Although there was one winner, all teams did a fabulous job showing their creative cupcake talents. Be sure to check out the photos, and stay tuned for my upcoming feature on “Chopped: Culinary Edition.”