The Horizon Honors Drama Department does it again with their rendition of “The Pajama Game,”a story dealing with labor unions, factory troubles, and a pair of hard working lovers. 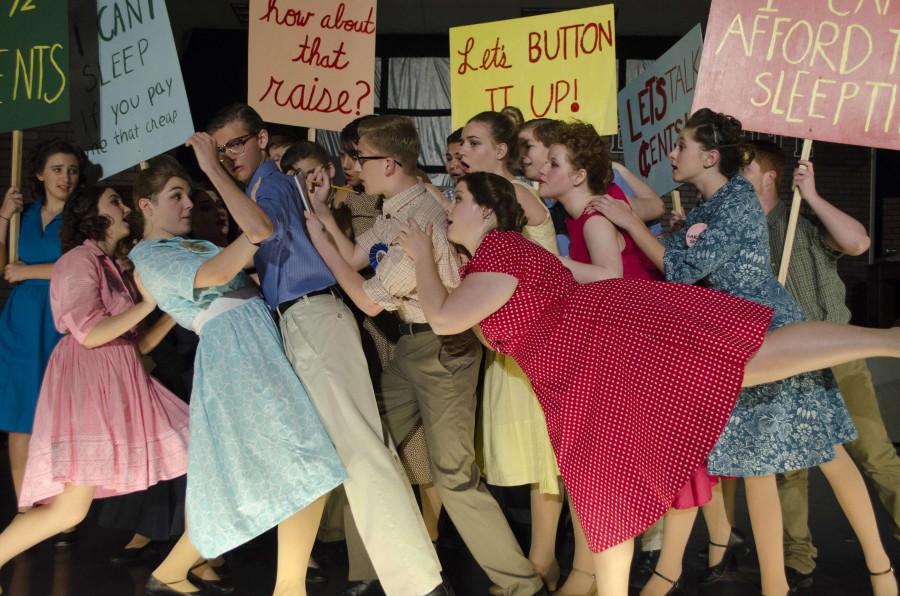 Horizon Honor's production of "The Pajama Game" was a huge success because of the fantastic cast and crew!

The sound of trumpets. Nervous, exciting energy. The lights come up. The show has begun. Six whole months of nothing but hard work and dedication have led up to this day, to this moment; the first live-audience performance of the spring production “The Pajama Game.” Within seconds of the first scene beginning, I could easily tell that I was in for something spectacular. By the time the performers were taking that final bow, they had definitely proven me right.

Shows are like icebergs: what we get to see is only a small part of what’s actually there; the rest is hidden underneath the surface. With shows, the performers are obviously crucial to the performance but there are so many other groups that are just as important, such as the tech crew, stage crew, and student leaders. The show would be absolutely incomplete without every single one of these groups. For example, freshman Haylee Haupt is the stage manager of “The Pajama Game.” “As the name implies,” she explains, “I manage the stage. I help Miss Shaheen lead the actors and tech crew members, along with our student director [senior] Erik Stahl. Basically, I’m responsible for anything that moves on or off stage. Honestly, it’s pretty stressful, but I absolutely love my job and all the amazing people I get to work with, and I wouldn’t trade the experience for anything in this world.” And we can’t forget the importance of the understudies! Freshman Ella Coste, understudy for Gladys Hotchkins, says that you don’t always get to do much as an understudy but it really does pay off: “Being an understudy can be tons of fun and it’s really an honor this show to be understudy for Gladys!”

All of the actors and actresses did such superb jobs portraying their characters. Seniors Sean McElrath and Beth Heaton played the two leads, Sid Sorokin and Babe Williams. Not only did they sound and look great together, but they also did an excellent job showing the chemistry between their characters in songs like “Small Talk” and “There Once Was A Man.” Heaton shares, “I have played several characters who fall in love with another character and each time it is a different experience. Sean and I have spent time together reading our lines to each other and telling each other what our characters are thinking. Looking lovingly and kissing each other takes some time to get comfortable with… [but] we practice our scenes with each other over and over until we feel comfortable.” But while watching, I noticed that everyone, not just the main roles, were portraying their own characters so well – the students transform on stage. Bianca Pizorno, an energetic and outgoing freshman, metamorphosed into the collected, proper Mabel (Sid’s secretary). The fun, laid-back junior Jason Wakely became the angry, uptight old Mr. Myron Hasler so well, I could barely recognize him. “On stage I feel completely different,” he says, “It’s so hard to explain; while I’m waiting to go on stage I don’t feel a difference, but something clicks right when I enter. I’ve never been able to truly understand what happens, but it’s a really cool feeling. The whole process is extremely long and has taken up the majority of my time for the last two months, so if I am going to be this completely separate character for such a long time, I would rather make it a fun process and really understand the character I am becoming. It sounds crazy, but when I think about my characters past it becomes a truly bizarre experience that will last a day or two, thinking about history between other characters in and out of the show. I don’t know, talking about it seems super weird, but it feels natural in the moment.”

However, as an audience member, one of the most fun things to see is when an actor or actress adds some of their own personality to their character on stage. Take, for example, sophomore Joey Vitagliano who played Vernon Hines, an audience favorite. He used some of the comical quirkiness he already had to make his character even more hilarious on stage. “While I try my hardest to separate my characters from who I am, the two do blend. Adding parts of myself makes the character more real to me. If my character has to show an emotion, I’ll think of an experience from my life that created that emotion, and channel it through the character,” he said.

As I watched, admiring the realness in all of the cast members’ performances, I also noticed that everyone was doing such a good job staying in character whenever, wherever they were. Whether they were dancing with a “7½ Cent” sign or just standing in a circle talking with their fellow factory workers in the background, everything seemed so real to them.

Because of everyone being so true to their character at all times, it’s tough being in the audience! There’s always so many different things happening, so many different things you want to watch. If you’re not looking at the right spot at the right time, you could miss cute little eighth grader Kate Wilson’s big facial expressions as she gets pushed around on a moving sewing machine or junior Haley Glew’s sassy wink in the “Steam Heat” dance number. You’ll want to come back over and over again, and watch something new each time (I know that’s what I will be doing).

I wish I could rate the show 7½ stars (watch the musical, you’ll understand) but alas I cannot, for it deserves much more than that. So instead I give to it the full 10 BIG golden stars it deserves, as well as 7 ½ cents and a standing ovation.
Do not miss your chance to experience the incredible talents of the cast of “The Pajama Game.” More performances will be held on Friday, May 1, and Saturday, May 2, at 3:30 and 7:30 pm.  Get your tickets soon, ‘cause we’re “racing with the clock!”