Behind-the-Scenes of the Mysterious “Ms. Holmes”

“Ms. Holmes” recently opened to the public on Friday, Nov. 8, and has had a long journey: here’s the exclusive behind-the-scenes info on it, spoiler-free! 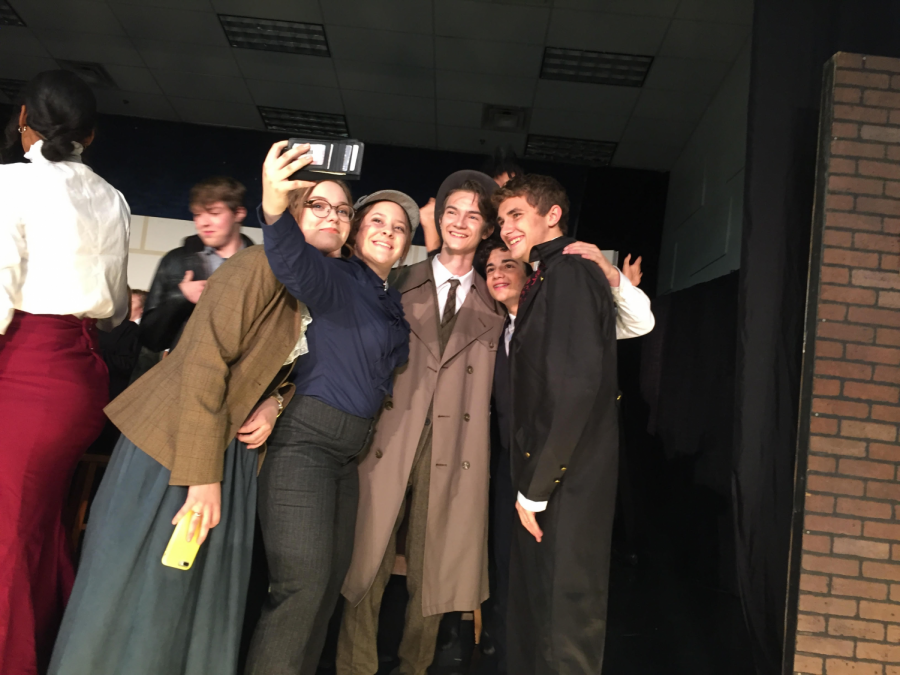 Rehearsal for “Ms. Holmes” began on Aug. 9, and the show has come a long way since then. The production started off in the community room with a makeshift stage of tape, and now it has a wonderful set and scenery in the multi-purpose room (MPR). Joshua Garrett, the director of the play, said his favorite part of the process of making the show is the “initial excitement when we do a read through, and people have been discovering things that I’ve already known for a while.” Garrett also works hard on making an efficient schedule that both actors and the tech team can agree on.

The actors and tech team must go through a specific schedule depending on their role in the show. The lead actors go to rehearsal for three hours every week to choreograph scenes, and those with lines in the play find it beneficial to practice their lines outside of rehearsals. Some Saturdays, the cast and tech are invited to work on the set and scenery for the show. Weeks later, as students work to complete the sets, memorize their lines and choreography, and continue to show up to practice, they are also required to develop their costumes. On the last day of the first quarter, the cast and tech are to show off their costumes and outfits to Mr. Garrett and the student costume designer for approval.

After fall break, the cast moves to the MPR to rehearse in order to refine their choreography and lines. At this point, Garrett requires everyone except the two leads, Sherlock and Watson (played by juniors Sadie Rich and Jocey Price respectively), to have their lines memorized. This is to make choreography easier and it enables the cast to use props, since their hands are no longer busy holding the script. These rehearsals end at 6:30 p.m. Two weeks before the show begins, tech joins rehearsal for one week called ‘Tech Week.’ Tech Week is important because the attention shifts from the actors to the crew, so they can learn their blackouts, scene changes, and sound cues. Tech rehearsals last until 8 p.m., but the cast and crew are rewarded with dinner.

The week before the first show, dress rehearsals begin. This is where both tech and the actors refine their roles to near perfection. These rehearsals also last until 8 p.m., and everyone is still provided food. The difference between tech and dress rehearsal is that the actors and front-of-the-house tech are supposed to dress up in their Victorian costumes, and tech wears their black, ninja-like outfits. This is “prime grind time” for everyone; the nervousness and energy of the cast and crew is at an all-time high.

“Ms. Holmes” had a successful Parent Pictures, which excited everyone involved in the play. The cast and crew celebrated by going to Five Guys, which is a tradition for each drama production. Garrett said that he hopes that “people watch this and feel like they have permission to do what they do and be who they are, regardless of what society is telling them they should be.” Tickets are $5 and the next show is on Saturday, Nov. 9 at 7:30 p.m. There are also shows on Nov. 15 and 16, at 3:30 p.m. and 7:30 p.m. Break a leg, “Ms. Holmes”!