The History Behind Blaze

The popularity of Mascots dates back to the 19th century. Mascots are a key part of school culture. They invoke emotion and get people excited. Blaze, our eagle, isn't solely a mascot but also a symbol of our school. 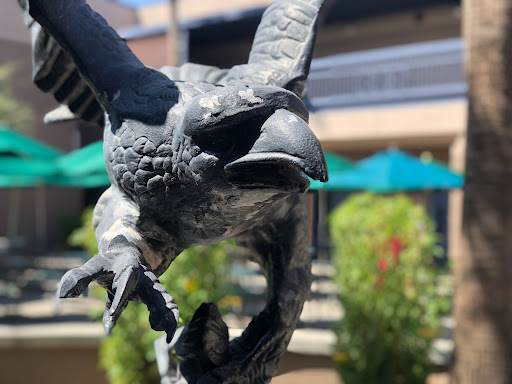 The history of our mascot has been shrouded in mystery.

Some schools have bobcats as their mascots, others bears, and there is even the occasional fruit. Whatever it may be, a school mascot says a lot about the community and is very important. Mascots create a sense of pride, loyalty and belonging to the people involved in that school, sport, or organization. They are associated with bringing luck to athletes and are used to rev up their supporters.

Mascots are symbols that people never forget, no matter how many years pass. Our four-leaf clover is Blaze the Eagle. However, how did this come to be? Out of all the animals or symbols that could have been chosen, why is it that a silver, blue, and black eagle represents us? In this interview with Betsy Fera, I take a thorough analysis into the history of our mascot and find out why.

Our school opened in 1996, and our current campus opened in 1999. They chose the mascot as soon as the school opened, “It was chosen before I got here and that was in 1999, so I think we were the Horizon Eagles from the very beginning,” said Fera, when I asked her about the year in which the mascot was chosen. When talking to Fera about why they chose the eagle, she replied, “Our founder, Larry Pierrat, loved eagles and what they represented.” Though it’s not clear if he specifically chose the mascot or the entire governing board mutually agreed on it, Fera noted that “eagles in general were very important to him and the whole symbolism involving eagles.”

An eagle usually represents freedom, independence, or even a connection to the divine. With this being the known symbolism, I wondered if that was taken into consideration when choosing the mascot. Fera says the message they wanted to portray when choosing the eagle was “eagles being able to spread their wings. The whole premise behind the school is creating students that could go out and make a difference in the world. Being bold, strong, and powerful.” The whole idea of spreading your wings and making a difference as you flew into the world was their main goal. Eagles are known to be bold and courageous. When choosing the mascot they wanted an inspirational symbol, and the eagle truly embodies that message.

As for the name Blaze, she says, “This was when we were celebrating our 20-year anniversary. At first we just called it the Eagle. As time passed, they knew they needed a name, so they decided to cast a survey with all students K-12. They narrowed it down to three names, and out of those names, the students chose “Blaze.” “It was totally student choice,” stated Fera. Though the school board chose the mascot itself, students were very much active in the rest of the process and were extremely eager to name the eagle.

Blaze is much more than a mascot. He is a symbol of empowerment and a constant reminder to spread your wings and fly no matter where you may land. It’s a representation of the courageous students at Horizon Honors and a stunning message. Next time you see Blaze around campus, you’ll be looking at him in a new light knowing the newfound knowledge of our lucky charm.