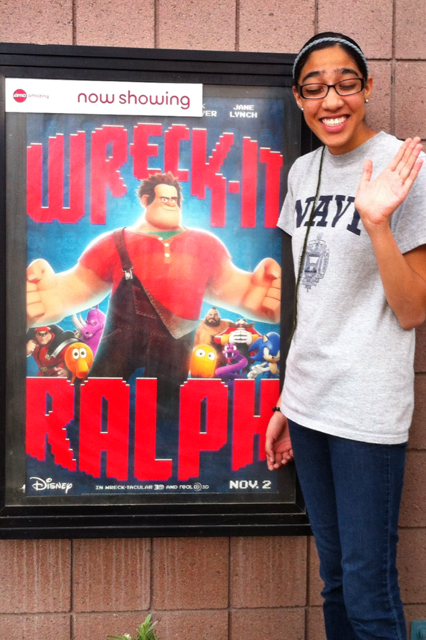 Used with permission by Alex Dockery

Disney’s animated movie, Wreck-It Ralph, centers around Ralph, voiced by John C. Reilly. Ralph is a big guy who has an equally big heart. He lives within the video game Wreck-It Ralph where his job is to smash windows and buildings until the game’s hero, Fix-It Felix, voiced by Jack McBrayer (who you may know from NBC’s 30 Rock), comes along to fix his mess and receive all of the glory. The movie begins during the game’s 30th anniversary. This event causes Ralph to reflect on his life and finds that he is not happy with how it is going. Ralph is essentially an outcast. No one wants to spend time with him because he wrecks everything he touches, and he gets no acknowledgment for his contribution to the game. Being that Fix-It Felix is the hero of the game, he ends up getting all of the attention. Ralph starts to really take notice of how unwanted he is, and begins to yearn for the life that Felix has. After finally having enough of this rejection, Ralph makes a decision to show everyone that he has what it takes to be a hero. In order to do this, he sets out on a journey through a strange subway system to new video games to find an opportunity to prove himself.

If you are planning to go see this movie, be prepared for a tear fest. I certainly did not expect the emotional roller coaster that this movie sent me on. One minute I was dying of laughter from Jane Lynch’s character, Sergeant Calhoun, who we meet in the first shooter game Hero’s Duty, and her flawless one liners. My favorite was when Fix-It Felix reveals his attraction to her and she deadpans, “Flattery doesn’t charge these batteries.” Then all of the sudden I was crying because of the adorable relationship between Ralph and Vanellope Von Schweetz, voiced by Sarah Silverman. Honestly, I was expecting Sergeant Calhoun to be my favorite character simply being she is voiced by the amazing Jane Lynch, but I was pleasantly surprised to discover that Vanellope Von Schweetz stole the show. Vanellope is an adorable little girl in a racing game called Sugar Rush. Vanellope is an outcast in this game because everyone believes that she is a glitch in the system and declares that she is not allowed to race with them. It is only when Ralph sees her being bullied and decides to help her that he truly begins his journey to become a hero.

This movie allows you to see the story behind the characters and discover some shocking things about them. You discover that everything is not as it seems, and sometimes people aren’t who you think they are. I really loved everything about this movie. The animation was incredible and the character development was excellent. The only disappointment may be in the limits of Ralph’s travels, since he only visits two other games. However, don’t let that turn you away from this movie because it has incredibly smart humor, very likable characters, and a Skrillex cameo for dubstep fans. This film was excellent and I highly recommended it to everyone.