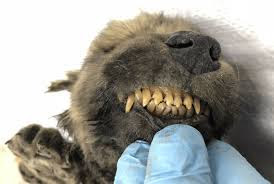 Dogor and his milk teeth.

Dogor is the name of an 18,000-year-old puppy that was recently discovered in the frozen Russian earth, according to NBC. This prehistoric pup has been confusing many scientists. After several tests, it was revealed that Dogor is neither dog nor wolf. So, Dogor could be an early dog, wolf, or an ancestor of both. Either way, the well-preserved, ancient puppy has been helping scientists better understand the development of canines.

Siberian Times states that locals found the pup in 2018 in a frozen lump of ground near Indigirka River. Scientists later analyzed Dogor’s teeth, which is an easy way to estimate the age of an animal. According to Newsela, the puppy still had its milk teeth, also known as baby teeth, so many scientists believe Dogor was just two months old when he died. DNA tests found that he was a boy, but they still couldn’t confirm any species relation to dogs or wolves, even though he looked like a canine. His DNA was too different from either animal to categorize him. Smithsonian.com reports that scientists believe that he is an ancestor of both animals, due to this conundrum.

There is a general agreement among scientists that modern gray wolves and dogs split from a common ancestor. Additional studies have found that dogs were tamed multiple times in different locations, according to The Atlantic, dating back to around the time Dogor was alive. The shift from dog to wolf resulted in differing DNA structures that can help identify ancient canine forms like this puppy, but there are missing pieces to the story. Putting history together is never easy, but Dogor’s DNA could help many scientists unravel the mysteries of man’s best friend.