The History of Christmas Stockings 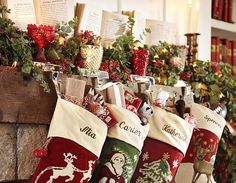 Be careful of coal in your stocking this Christmas.

A tradition in many homes during Christmastime is to put up stockings by the fireplace. Even though it is not clear when it became a popular Christmas tradition, these decorative socks have been around prior to 1823, as they were referenced in “Twas the night before Christmas.”

According to the legends, the tradition of hanging Christmas stockings came from the fourth century and involves St. Nicholas. Point Park University states that, while passing through a town, St. Nick heard of a poor man who was grieving the death of his wife and his inability to pay a dowry for his three daughters’ possible suitors. After learning this information, St. Nicholas allegedly crept into the man’s house or slipped down the chimney and deposited gold coins in the daughters’ stockings, which were hanging by the fireplace to dry. The poor man, too proud to accept regular donations, could now pay dowries for his daughters.

The story spread and families everywhere began putting gifts in stockings to mimic receiving good gifts from Santa Claus. From there, the tradition developed its own unique traits. In another version of this story, gold balls were placed in the stockings. According to Desmond Morris, this turned into the tradition of putting oranges in stockings, which resemble gold but are more affordable to the overall public. The unique tradition of putting coal in stockings originated in Italy, where La Befana, a mythical elderly woman who was said to be searching for the three wise men and baby Jesus, left candy for the nice children and coal or dark candy for the naughty children on her journeys, as Point Park University states.

Even though the idea of hanging stockings over the fireplace started many many years ago, they still play an important part in the holidays. By having Christmas stockings in your home, children get to have a place where smaller presents are placed for them to enjoy.