Where did the sweet treat of candy come from? 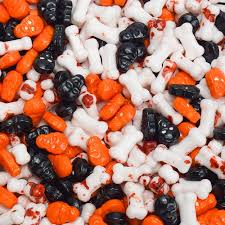 At this time of year, many people enjoy some scares and sweets for Halloween, but not many people know where the concept of sugar candy originated.

According to ThoughtCo, the words “sugar” and “candy” came from what the ancient Arabs called hardened sugar: “sukkar quandi.” The French and Italian then adopted the term for a similar substance.  Although we now associate candy with sugar, the first thing to be called candy was actually just fruits and nuts wrapped in paper and dipped in honey. Sugar wouldn’t be adopted as anything other than a preserve until the middle ages. Even then the wealthy were the only ones who could afford it, as it was grown far away and was hard to get a hold of. Sugar wouldn’t be widely used until it was discovered to supposedly be able to help digestion and sore throats (cough drops are a modern example of this function).

The Industrial Revolution completely changed who had access to hardened sugar candy, giving it its fame. In 1800, nearly 400 factories had been solely dedicated to making hard candies, spreading them across the country and increasing accessibility. Before that, factories could be opened because Cuba and several South American countries had been completely used for the production of sugar. Their proximity to North America made it easy to turn a profit on sweets.

Although widespread nowadays, the process by which sugar is made is actually quite complicated and takes lots of time and patience to do properly. It begins by melting down the granular sugar produced by sugar cane that has to be melted down and heated at ridiculously high temperatures, then placed in a cooling tray. But if it cools too much too quickly, the sugar would become brittle and crack in someone’s hands like a thin sheet of wood, splintering off and rendered unusable.

Candy only began to be associated with events like Halloween because of its similarity to Irish pagan rituals, where sweet foods were used as a feast item, were brought over to America. Nowadays many people just take the sweet food for granted, without realizing how complicated and international the history of candy actually is.