The History of Rickrolling 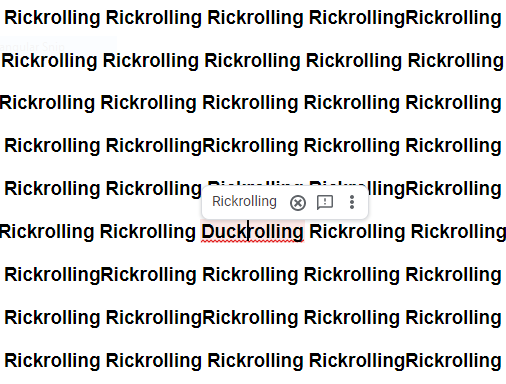 Rick Astley's song "Never Gonna Give You Up" lives on through meme culture.

Rickrolling has become legendary in the meme community ever since it got the media’s attention, but where did it come from in the first place?

Rickrolling is ever changing, and has a rich history. Although, before we cover it, we need to know what it is. Rickrolling is the act of giving someone a link to something, but it ends up taking you to Rick Astley’s “Never Gonna Give You Up.” The song was released on July 27, 1987 and was immediately loved. Around 1 million copies were sold, and is one of the top 10 songs of all time, according to Billboard.

While the song is the most important part, the actual meme came from something different. There was another meme by the name of duckroll. It has the same premise, where a link would lead to a video, although this time, the song was not known, and was named “The Picard Song.”

After the meme’s success, the template surrounding it was incorporated with tons of different songs, and eventually laid its eyes on the song we all know and love today. The meme dubbed “rickrolling” gained massive popularity, and when youtube used it for the 2008 April Fools day joke, the popularity grew to humongous heights. Later in the year, Rick Astley himself even rickrolled the audience of the 2008 Macy’s Day Parade by performing.

Where is the meme now, and where is it heading? While the meme is still being used, it has grown into something more. After having an interview with an eighth grader, Noah Thompson, he had agreed that the meme seems more as a name for the bait-and-switch group, and that shows exactly where it is now.

The rickroll is no longer about the song, but the premise instead. Rickrolling, while an amazing meme, overshadowed what made it, with duckrolling being forgotten. For more information about the subject, click here.