A system built out of a distrust of the American people that’s existence is harmful to democracy. It’s time for us to end the Electoral College. 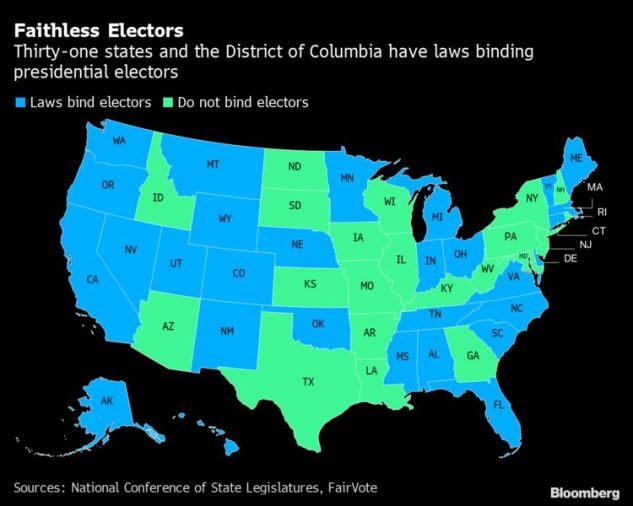 A map of which states do and don’t bind electors.

The Electoral College is a system in which electors are chosen from each state by the people in it to vote for a presidential elect on their behalf. Remember that voters are not voting for their president but for the electors they want to represent their party. The number of electors is the state’s number of representatives (based on population), plus its number of senators (two per state). Whichever party’s candidate gets the most voters in each state gets all the electors for that state (in most cases). This system was developed by the founding fathers, according to Alexander Hamilton’s 68th Federalist paper, during the Constitutional Convention as an agreement between large states and small states to keep balance.

Although the idea that the College keeps balance between states is undeniably true, it just doesn’t make sense for our democratic nation. Why shouldn’t larger states get more power? If we didn’t have states this wouldn’t be a problem. The presidential elect should be based upon overall voter population, not an individual state’s entire population.

The electoral college fundamentally goes against the ideals of our democracy. The people should choose who they want to be president. There have been five elections in which popular vote losers won the election, which is the intended purpose, but that doesn’t mean it’s good. The two most recent cases in which a president won the election were, according to 13NewsNow, George W. Bush in 2000 and Donald J. Trump in 2016. Clearly, the will of the people was not followed in these elections.

One fundamental flaw in the system widely used by states today is the winner-take-all approach in which 100% of a state’s electoral votes are designated to the person who obtains one more vote in that state. That means that in heavily partisan states, voters in the minority will realistically never have their presidential vote matter. For example, note if you are a Democrat in Oklahoma or a Republican in California, there is no realistic chance your vote will impact the electoral results. There are currently two states (Maine and Nebraska) which allow electors to be split to allow some electoral votes to go to each candidate which reduces the impact of the winner-take-all flaws.

In addition to previously mentioned problems, not all states require electors to vote with their party. According to FairVote,only 33 states bind their electors by law to vote in line with election results and most don’t even offer punishments if you break the law. This means that all 38 electors in Texas could just vote for whoever they want to be president and not who their states voted for. This could theoretically shift the entire outcome of an election.

A common argument in favor of the electoral college system at the time, and now, is best explained in this quote by Delegate Elbridge Gerry in 1787: “the people are uninformed, and would be misled by a few designing men.”  While this may have been the original intent, that is not how the system operates today given that electors by and large merely cast their votes based solely upon who the majority of people in that state voted for. Electors are not required to be more educated on topics than your average voter.  Abolishing the Electoral College would mean that everyone’s vote is equal. This could lead previously disenfranchised voters to become more eager to vote and educate themselves on topics.

Although there are certainly more pressing issues at the moment, the fact that something like the Electoral College goes against democracy in such a blatant way can be damaging to our country’s people. It is true that the flaws of the structure aren’t seen often. But, the president is undeniably very powerful and they should be carefully chosen by the people, so we never have to see just how much harm one person can do to our country.