Out with the Old and In with the New: the Anime Generation Talk 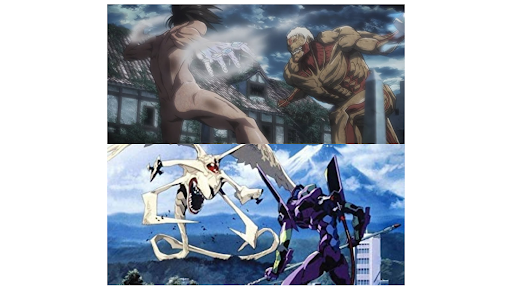 Battles in "Attack on Titan" vs. "Neon Genesis Evangelion."

The two most debated topics in the anime community are whether new-gen anime or old-gen anime are considered better, and which new-gen anime deserves to be crowned best; however, both new-gen and old-gen have their pros and cons, and anime culture has changed way too much to make a fair comparison.

Things that can be compared, however, are things such as animation, genres, and dialogue/censorship.

There is a lot of controversy behind censorship in anime, especially between old and new anime. Considering the fact that some things were more acceptable in 1970-1990 than in the 2000s-2010s, it’s hard to compare. For example, in animes such as “Ouran HighSchool Host Club” (2006) and “Ranma ½” (1989), slurs have been used for comedy purposes. In animes like “Neon Genesis Evangelion,” there are scenes that show nudity, but cover certain parts at a very small amount. In new-gen animes, nudity, or fan service, has been seen as well, like in animes such as “My Hero Academia” (2016) where Momo Yaoyorozu and other female characters have exposing hero costumes. As for gore, animes like “Devilman: The Birth” (1987) show insane gore and sexual content/nudity, whereas “Tokyo Ghoul” (2017) has a pretty censored anime adaptation (despite having a plot centered around gore) mainly so it can fit a certain age rating. However, the amount of censorship does depend on the genre or targeted age rating, since the Devilman adaptation, “Devilman Crybaby” (2018) is still pretty uncensored.

Something else that has changed a ton and that draws the line between new and old-gen anime is the evolution of certain genres. For example, the shonen genre, which is one of, if not the most popular genre in anime. The genre mostly centers around action and is aimed at teen and pre-teen boys, however, almost everyone enjoys it. In the 90s, most shonen animes had a habit of creating the same type of the main character; dumb goofballs that are way overpowered, with their super-smart sidekick. An example of this is Goku from “Dragon Ball Z” (1989). However, the new-gen shonen characters such as Deku from “My Hero Academia,” Eren from “Attack on Titan,” or Tanjiro from “Demon Slayer” (2019) have more well-rounded leads. Another example is the power systems. In the old-gen shonen series, most of the character’s powers were extremely powerful, which made for entertaining battle scenes; however, they made little to no logical sense. Now, new-gen animes like “Jujutsu Kaisen” (2020) or “My Hero Academia” have way more realistic and complex fighting scenes. A lot more things are new as well, with more defined secondary characters, more powerful/complex villains, and the fact that it isn’t only a genre aimed at boys anymore, as many animators would create shows more appealing to the male audience in the past.

Now comes the age old debate: which anime wins best new-gen, and which wins best old-gen? For old-gen series, most people prefer “Dragon Ball Z” (which can be streamed on Hulu) because of its nostalgia and the fact it was the blueprint for most shonen animes, and “Neon Genesis Evangelion,” because of its complex plot and focus on mental health. It can be found on Netflix or Naruto. People also enjoy “Cowboy Bebop” (1998), which is still considered a legendary anime amongst new-gens and old-gens alike. It can be watched on Hulu. As for new gens, popularity mostly centers around “Attack On Titan,” “Demon Slayer,” “My Hero Academia,” and “Haikyuu,” all of which can be streamed on Netflix or Hulu.

Times are constantly changing, and so is anime. Both old-gen and new-gen can be enjoyed by anyone, as old-gen holds nostalgic value and more original storylines and character design, whereas newer animes have more complex characters and plots, as well as higher quality animation. It’s impossible to really decide which one is best since the time periods are so different. Despite the debates around the topic, though, everyone is excited to see how much more anime will evolve as a whole in the future.