With the end of the school year, every student looks forward to seeing their school yearbook and remembering the year. However, one school has students seeing something different. 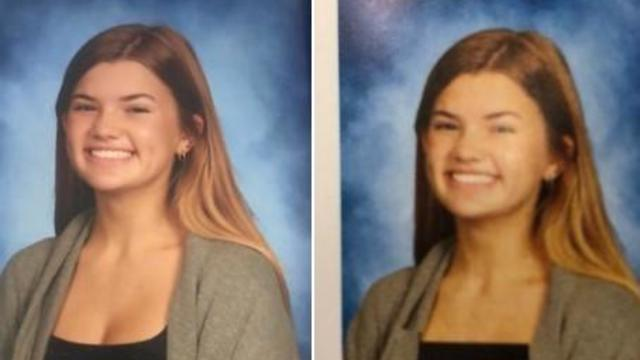 One example of the poorly edited images.

In Florida’s St. Johns County, at the school Bartram Trail High School, there was an outcry for change after student photos were edited. What the students noticed was that photos of the girls in the school were changed to cover up skin. The school’s reasoning for these changes was it was to adhere to their dress code. The school’s dress code states that students may not wear clothing that is “immodest, revealing, or distracting.” And so, the school took the students’ yearbook photos and edited them to cover their skin, including the students’ chests and shoulders.

However, the school obviously had made little to no effort into editing the images, copying parts of their clothing and pasting it over the skin. What the students found when they looked at their yearbook were no longer the photos they had taken. Parts of their clothing were deformed and unnatural. Not only that, but the students were not informed that their photos were to be edited, giving them no other option than a heavily edited and censored photo in their yearbook.

These images were in yearbooks available for the entire school to see, causing many of the girls to feel uncomfortable and embarrassed. Students are being made fun of and talked about because of the photos. With how stressful school can be already, it’s just a little more to have the students take on. Something else these students are upset about is how they are being looked at. Many of the girls reported in an interview that they feel sexualized. After all, they point out that it was the first thing they seemed to worry about. When looking at the girls, just from showing their shoulders and a little bit of skin, they saw it as sexual. One of these students talks about the double standard. With females, showing any bit of skin can be seen as sexual, whereas the boys seem to have much more lenient rules for clothes.

Even if the clothes were out of dress code, there are many other things that the school could have done. The most obvious, of course, is to tell the students that their photos are out of dress code. Especially when many thought that the clothes were fine to wear. One of those students was Riley O’Keefe. O’Keefe’s mother stated to CNN that her daughter had worn that same outfit to school many times before, never being told that it violated the dress code.

Overall, the girls in the school feel a double standard. They are embarrassed and feel sexualized after the actions taken to censor their photos. The clothes they are wearing are being taken as sexual, while the boys get a more forgiving dress code. For many, it is more than just a photo.