Horror on the Border 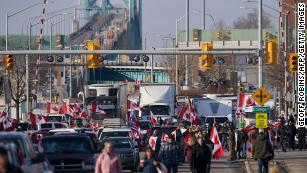 Several key points of crossing between Canada and America were blocked by the anti-mandate protests.

What began as a rule for all truckers to be fully vaccinated soon turned into something massive as many critical pathways for Canadian-American trade became blocked. Protesters joined the vaccine mandate protest known as the “Freedom Convoy,” supply chains have been interrupted, and people can’t cross a common border from the U.S. into Canada. Canadian protesters started this protest on Feb. 2 and it ended Feb 17. As stated by CNN, the protesters are using trucks to block common areas for attention and to get their point across.

Each day, authorities attempted to end the protests, however, nothing seemed to get the protesters up and moving. Problems continued to escalate, and police tried to put an end to the situation.

Auto factories are facing supply chain issues because of the protests blocking many common bridges such as the Emerson Bridge, Ambassador Bridge, and Coutts Bridge. As authorities try to cross the bridge to get the parts they need they get stuck in the chaos. “The current border disruptions are adding additional strain to the automotive supply chain that has already been stressed by semiconductor shortages and other pandemic-related issues,” said a coalition of three auto industry trade groups. As stated by CBC, auto factories are continuing to minimize and use anything left of what they have while the protests are being stopped. The border being blocked is creating a huge economic issue resulting in $500 million dollars lost each day.

A deadline was made on Feb. 7 at 10 a.m. for protesters to leave the bridge, but everyone stayed. Some even brought out lawn chairs and food to keep them comfortable and busy. A Canadian judge then ordered police to get tow trucks and tow each individual car away. However, the tow trucks ended up joining in on the protest, piling their heavy trucks on the bridge and blocking the common area. Prime Minister Justin Trudeau stated that if the protests continue because people are tired of COVID restrictions, they would suspend their licenses. Police warned everyone in the protests that anyone continuing to protest will be charged and or arrested. When nothing changed, Trudeau had a new idea to stop the protests. He wanted to freeze all the protesters’ bank accounts until they get vaccinated and stop protesting. He also gave police “more tools” to press charges and imprison the protesters. The chief of police explained they didn’t have enough resources to stop the protests, but they received more and are slowly fining and imprisoning many protesters. Other Canadian truckers who were not involved in the protests are explaining how they never wanted it to come this far and are fine with the vaccine mandate so they aren’t charged just for being a trucker.

Police are eager to end the protest as a massive raid of police enters the bridges with seized long guns and body armor. According to BBC, state troopers started by seizing many of the trucks in the protest, with dozens of state troopers going to the bridges and arresting or charging each individual to finally end the scene. The police cleared the bridge by towing away each and every vehicle.

This peaceful protest resulting in many economic issues is finally coming to an end. The situation lasted from Feb. 2 to Feb. 17. The Freedom Convoy protests have proven to be one of the most impactful and economically detrimental protests in Canadian history.