The fifth “Scream” movie came out, and it definitely had its quirks. Be aware, there are spoilers ahead! 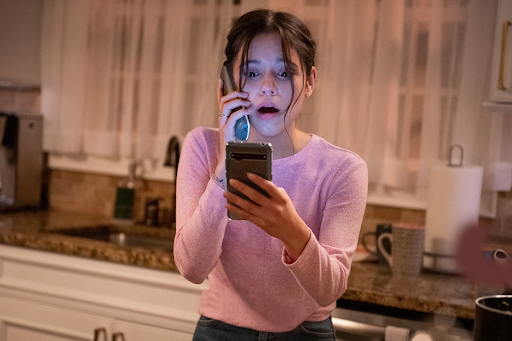 Though entertaining, "Scream 5" was just too odd.

“Scream” is an ongoing franchise, with the first installation coming out in 1996. It starred actors such as Neve Campbelle, Courtney Cox, Skeet Ulrich, and David Arquette. After the first one made $173 million at the box office, only one year later, “Scream 2” came out. This process continued over the next 20 years, eventually leading up to present day, when, on Jan. 24, 2022, “Scream 5” came out.

The movie starts out with Tara Carpenter, played by Jenna Ortega, getting a call on her landline. This was odd, considering that this is taking place in the modern day, and no one really uses landlines anymore. She ignores it, but is surprised when it rings again. She reluctantly picks up and talks to this mysterious caller. After a while, she gets hit with the classic “What’s your favorite scary movie?” question, a staple of the series.

Tara ends up getting attacked by the killer in the ghost face mask, and goes to the hospital, but somehow lives. One of her friends calls Tara’s older sister, Samantha. Sam lives about five hours away from Tara, since she’s much older and moved out a while ago. She and her boyfriend, Richie, pack up some stuff and head over to Woodsboro, the town Tara lives in.

Tara’s friends are on alert when another attack happens, and they heed the warning that the mysterious killer is only killing people that Tara knows. The overall kill count for the movie is seven, including Dewey, the cop that has been in every “Scream” movie. It was a shocking and devastating death for the franchise.

The killers ended up being Amber, Tara’s best friend, and Richie. Although it was shocking at the moment, it was predictable and cliche. In the first “Scream” movie, it ended up being the boyfriend as well.

Overall, the plot was a little too chaotic. There was a lot going on, and it was at times hard to follow. For instance, Ghostface (this time it was Amber in the costume) got shot three times in the stomach during one scene, but was walking around as if nothing was wrong the next scene once out of the disguise. Ghostface is the made-up name for the costume that the killers are wearing in every movie.

Another thing that annoyed me was that they played onto the fact that they knew they were in a horror movie too much. There was a scene where the characters were talking about a movie called “Stab” which was obviously just “Scream” but it had a different name. There was even a scene where Mindy, one of Tara’s friends, was watching the original “Scream.”

Even though there were things about it that made little sense, it was still entertaining. It played its justice to the original film and had the original characters in it. It took some unexpected twists and turns and had some breathtaking moments. In the end, though, having so many things that didn’t make sense made it hard to enjoy.