Doja announces over Twitter that she’s retiring from music. 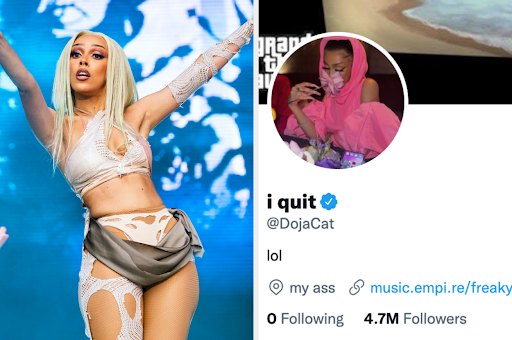 Doja Cat is a female singer and artist who has recently become popular. The singer stated that she is quitting music after feuding with fans over social media. The conflict began when Doja refused to take pictures with fans because her Paraguay show was canceled. Doja posted a series of tweets, claiming she no longer had the desire to follow music anymore. She had even updated her Twitter username to “I quit” and her bio to “lol,” according to CNN.

According to Fox 9, Paraguay’s Asunciónico festival had been canceled because of flooding, which was where Doja would have performed. Fans were disappointed at this, which led them to take to social media and express their disappointment. Billboard states, Doja was also disappointed in the outcome and the reactions she was getting from her fans. She then later posted a paragraph on Twitter, saying “It’s gone and I don’t care anymore I quit. I can’t wait to disappear and I don’t need you to believe in me anymore.” After fans shot back, she followed with, “everything is dead to me, music is dead, and I’m a fool for ever thinking I was made for this. This is a nightmare, unfollow me.”

After a cool down, Doja came back to the media and apologized for the recent posts, which fans suspected meant she was going to be continuing with music. However, Independent says that Doja then brought back the confusion by responding to a tweet by Florida radio station MIX 105.1 addressing the total confusion of the matter and Doja replied with “Yes I am.”

This whole situation has left fans confused, upset, and disappointed. No matter what path the singer follows, she will always be an enormous influence to this generation, considering the amount of hits she has released. It is still a hope by fans that she will return to the music scene, but the future is unknown for Doja Cat.