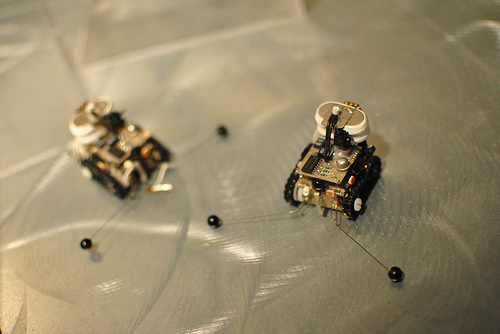 Researchers in the U.S. have been studying the patterns of colonizing insects for years, and researchers at the New Jersey Institute of Technology recently completed a study with robots designed to mimic the colony structure of an ant society.

Made of small cubes and wheels, the robotic insects don’t actually resemble ants, but they do serve the purpose of mimicking their actions. On their own, each robot would get lost and would move about randomly. As a group, however, each robot leaves a trail for the one behind it, so it won’t get lost or separated from the group’s route. While actual ants use a trail of pheromones, these robots use a trail of light that they can detect with two light sensing antennas.

The information that these studies reveal help researchers to get a better grasp on how animal society works. The ability to replicate animal behavior in robots demonstrates an understanding of the ideas behind the action. There may not be a set purpose for these robots now, but the research has helped expand the understanding of the set principles of animal behavior. Dr. Graham, a member of the research team, explained that, “Lots of animal behavior gets described using words like ‘choice.’ This shows that you don’t need something as complex as choice to get some of the behavior you see in ants.”