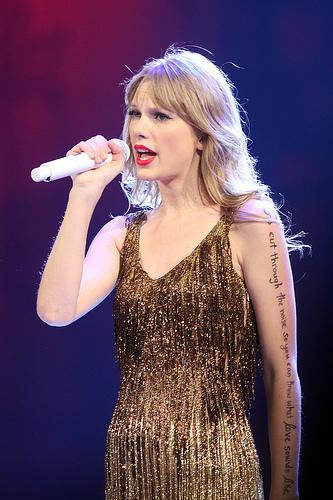 Adaption of photography by Eva Rinaldi, available under a Creative Common attribution license

On May 28 and 29, Taylor Swift was in Glendale, Arizona at the Jobbing.com arena for her Red Tour. Both Arizona shows were sold out; overall 13,000 people attended the shows. Along with her band, Swift also played instruments including the banjo, piano,  and acoustic and electric guitar.  Each song had a different theme and costume, and by  the end of the night, ten costume changes were made.

Ed Sheeran opened for Swift with songs such as “Give me Love,” “Lego House,” and “A-Team,” performing a total of six songs. He played an acoustic guitar and used loop pedal on stage. Besides singing, he shouted sayings to the crowd that they would then repeat back to him. Once his opening act was over, he later came back for his duet song with Swift, “Everything Has Changed.”

Not only did she perform well, but Swift herself was able to tell stories about her music that made the audience feel like they knew her personally. Throughout the show, Swift would introduce her songs with hints to who or what they were about. For example, in “We Are Never Ever Getting Back Together,” she left a hint about a British accent that let the audience know immediately that this was for One Direction’s Harry Styles. She also explained the meaning behind the tour title, saying “Red” symbolizes her extreme emotions that switch between  love and hate which is what this album is mainly about.

Throughout the show, the audience traveled through the different themes and time periods, from a 1940’s  styled “Lucky One” to a 60’s remix of  “You Belong With Me.” Then, a version of the Nutcracker was performed for “Enchanted,” and she proceeded to end the night strong at a circus for “We Are Never Ever Getting Back Together.” Overall, it was an exciting show with many surprises.