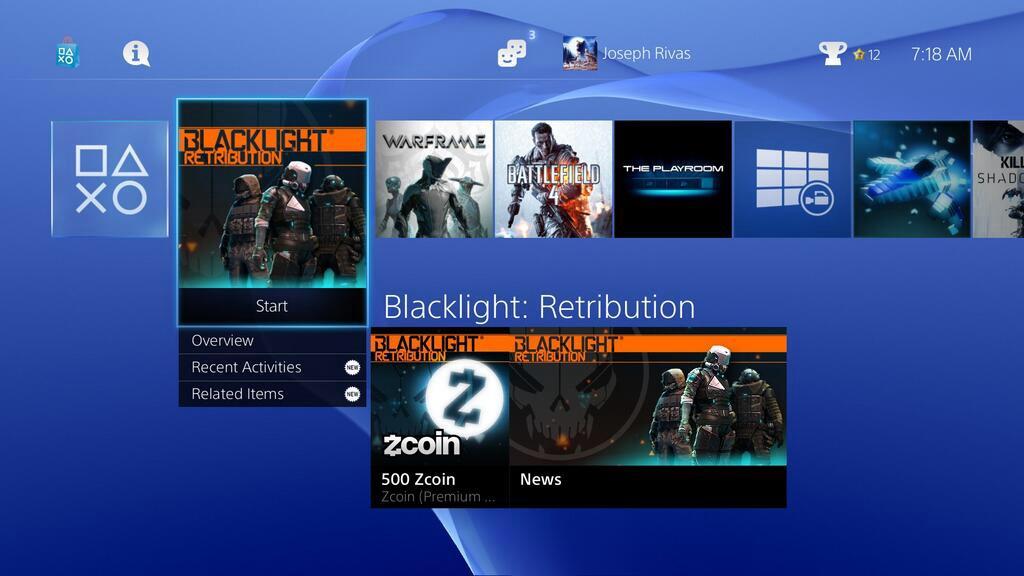 This is the PS4s main user interface, the games shown are Blacklight: Retribution, Warframe and Battlefield 4 this picture was taken using the PS4s share feature.

The long awaited Playstation 4 is out and I’m very pleased to say it’s fantastic. Sony has outdone itself by releasing the single best Sony console to date, but problems have still arisen.

The chassis for the PS4 is slick, stylish, surprisingly small, and incredibly quiet with a considerably smaller footprint the the seemingly monolithic XBOX ONE, but it has its downsides. The PS4 has a rear facing fan that in certain enclosed entertainment centers could cause problems with heat dispersion and ventilation.

Sony has addressed almost all of the main complaints about the PS3’s controller. The PS4’s controller is more ergonomic and fits very well in almost any palm. The triggers are superb and the thumbsticks are precise. The new controller is slightly different than its predecessor as the “start” and “select” button are gone and in their place are “options” and “share” buttons. The option button works exactly like a start button, but the “share” button allows for the general user base to both stream and record gameplay with three to four button presses. This usually works flawlessly, but from time to time, the PS4 will lock up for a good minute and then sign me out of my account.

The main user interface is an adaptation of the PS3’s cross media bar; the new user interface is fast and everything is easily accessible. In terms of hardware and sheer power, the PS4 is the one to beat. The PS4 comes with an AMD based APU & 8GB’s of GDDR5 ram, both of which are extremely beneficial to the performance of larger open world games.

At launch, the PS4 is relatively dry in terms of games and apps. Although the games out at launch aren’t bad, there’s not enough PS4 exclusive content to justify a $400 purchase. The PS4 requires a mandatory install of every downloadable and disc based game. This would not be an issue, but the PS4 comes with a 500GB hard drive and game installs range from 8GBs to 57GBs. This issue is not devastating because the hard drive can be replaced with any SATA 2 laptop hard drive. This process is relatively easy and quite painless as I upgraded to a one terabyte hard drive.

The PS4 is a superb console, but it is not quite yet worthy of a purchase. It has a long way to go but it’s a sound foundation and makes me excited to see where Sony takes it later on down the road.