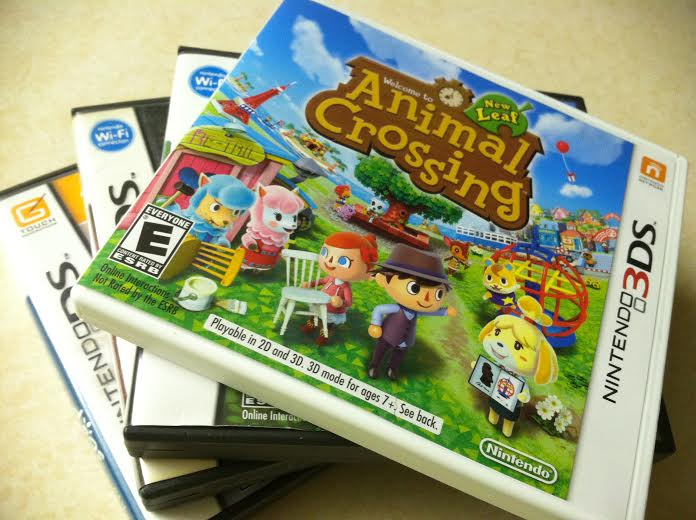 Animal Crossing has been a popular game among the softcore gamers ever since its first release in 2001. It thrives today, having a personality that keeps gamers buying.

Almost nothing can beat a long gaming session of Animal Crossing: New Leaf, the most recent installment of the Animal Crossing Series.  This time around, the player is made mayor by the villagers of the town you arrive in.

Here’s a summary of Animal Crossing: you run around your town on your 3DS to interact with the animal-people (a.k.a your neighbors), expand your house, decorate it, buy clothes and accessories, and donate to the local museum by catching multitudes of fish, digging up fossils, and catching bugs.

Which leads us to the useage of all those tools you can by.  As previously stated, you have the ability to catch numbers of seasonal fish and bugs, some common and some rare.  You have the choice to make your living by selling these, but when you aren’t so in need of money, it’s good to donate them to the museum, which is run by an owl called Blathers. (he stays true to his name).  In New Leaf, the gamemakers have added a megaphone, which you can use to call your villagers to you.  Although this can be useful, it tends to be that I end up making my villagers angry (since they’re right next to my player).  But if I can’t do that, what’s the point of being mayor?

Then there is Main Street, which is right above the train station.  You can fill this place with shops, like Kicks, a shoe store, Shampoodle’s, a hair salon, and Club LOL, a club run by an axolotl named Shrunk, a former comedian.  This has definitely upped my gaming experience by giving more choice on things to do in a regular Animal Crossing day.

I also enjoy being able to travel over to my little sister’s town, where we exchange fruit, clothes, and just about anything else.  We chat each other, and run around town hitting each other with our nets. (can you feel the love)?  Sometimes we go to the island, which is also a new feature (and my chief moneymaker).

So, the island.  A turtle called Kapp’n takes you on his boat to the island, where his wife, mother-in-law, and daughter live.  And then there’s also a tortoise called Tortimer.  If you’ve played any of the previous game, you’d know that he’s been the mayor for every other Animal Crossing game, and that he’s finally retired.  And to what a place has he retired to.

The island is, like I said, a moneymaker.  You can play games to earn medals, and use the medals to buy accessories, furniture, and even wetsuits to go diving in.  Outside the main building (which contains the “store”), it’s a teeny tiny paradise.  The island harbors tons of rare bugs and fish, and it’s a great place to catch sharks (with your regular fishing rod).  I usually come home from the island with at least 50,000 Bells (bells are the form of currency in the Animal Crossing universe).

And because I feel like it, I’ll talk about the neediness of my neighbors.  I’m pretty sure they would be dead without me.  I deliver their packages, bring them fruit, catch them bugs and fish, give them furniture and clothes, water their gardens, and even pay for their groceries.  Okay, well, the last one wasn’t true, but you get the gist.  Even though it’s hard work to take care of all of them, it’s actually kind of fun to help them out (especially when they throw in a reward).

However, as the mayor in New Leaf you are handed a whole slew of new jobs.  You have the capability to enact ordinances, create petitions, open stores, and execute public works projects.  As Uncle Ben so famously said, “With great power comes great responsibility.”  Therefore, while you can do all of these things, you have to do most of them yourselves.  You raise the money to donate to your projects. (It appears that the villagers are incapable; they don’t even get furniture when they shake trees).  It’s a very satisfying feeling to be able to build up your town the way you want it.

I know it may sound boring to the hardcore gamers, but I find the gameplay entertaining and relaxed.  The goals in the game can be similar to real life, such as the need to pay off a mortgage, but then it’s also unrealistic (if you need a example other than the fact that you have animals for neighbors: you can catch a shark with a regular fishing rod and shake furniture from trees).