JV Volleyball Picks On Parker With Another Win 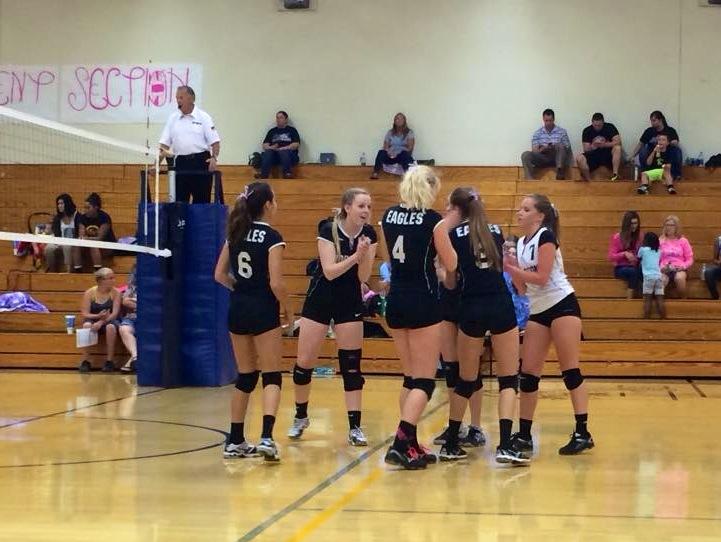 The lady Eagles bring it in for an encouraging cheer during their game against Parker.

On Oct. 7, at four in the afternoon, the Horizon Honors Girls JV Volleyball team gathered around the volleyball net to begin the day’s match. The game took place in Parker’s home gym, which was decorated as a pink-out, in honor of Breast Cancer Awareness Month. The girls were able to win the game in two sets to 25.

During the first set, it took the team a while to really start playing hard. The score was tied nearly the entire time. Much credit can be given to both middle fronts, freshman Hannah Glew #20 and junior Emily Rush #13, for helping lead their team to victory. Both players were largely successful in their blocks and attacks throughout the game. Despite the continuous tied scores, the girls were able to pull ahead at the end, finishing the game at 25-20.

The second set proved to be a much easier win for Horizon Honors. Although the team was awarded many points due to mistakes made by Parker’s team, they also earned various points through aggressive rallies and serves. One server in particular, freshman Erica Kendree #5, was even able to serve 11 times in a row, bringing the score to 14-2 in Horizon Honor’s favor. The girls quickly wrapped the game up with a final score of 25-4.

Both JV and Varsity Volleyball teams have yet more home games over their fall break: Oct. 9 against Tonopah Valley and Oct. 10 against Kingman. Their final home games and senior night will be on Oct. 30 against Yuma Catholic.