Ending State and the Season

Horizon Honors Varsity Girls Volleyball takes on, and loses to, Northwest Christian in the second round of the State Championships, sending Horizon Honors home for the season. 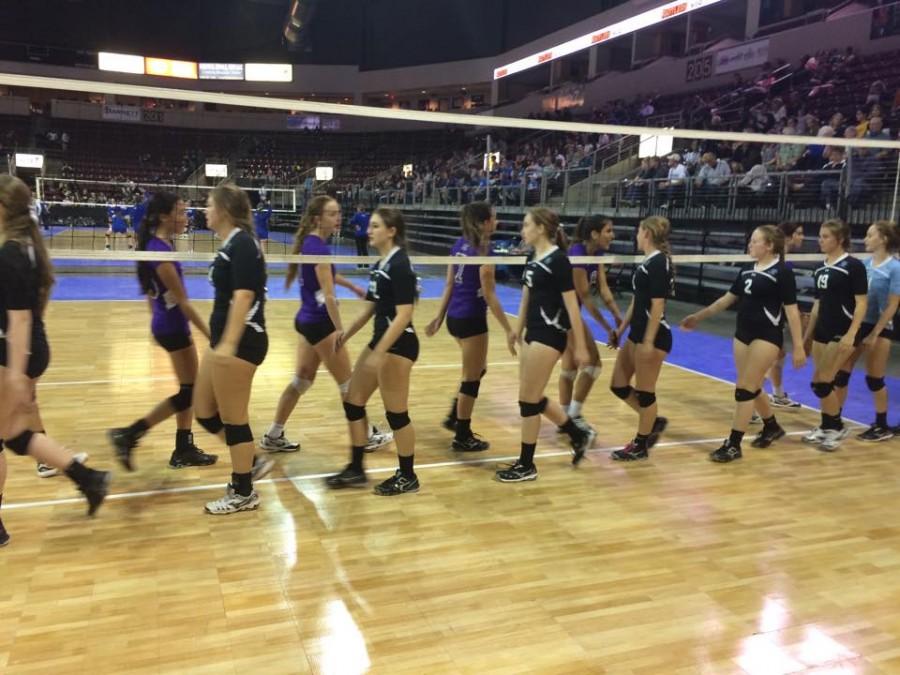 After their final match of the State Championships, Horizon Honors shakes hands with Northwest Christian, congratulating them on their win.

The first set began with Horizon Honors’ serve, but possession quickly transferred to the opposing team’s side. Northwest had some tough hitters, especially on the outside and right side, but libero, freshman Erica Kendree, number 21, was able to get a majority of the balls sent over back up. But the energy on the eagles’ side was not as high as it was on their opponent’s side, and the game was lost 15-25.

Some of this lost energy was found again in the second set however. Horizon Honors’ offense rapidly increased, and with that came more point-earning hits and blocks made by the front row players. The eagles were able to keep up with Northwest’s plays, and were even able to keep the lead for a few points at a time. Although Horizon Honors fought hard for this set, Northwest was able to jump ahead at the end, winning the set 25-22.

The third set saw around the same amount of energy as the second, but still not enough to pull out a win in the eagles’ favor. Northwest was able to pull ahead with their scrappy defense and well-placed shots. Near the end of the set, sophomore Giuliana Castranova, number three, was substituted into the back row. Her energy and yearning to win was helpful to the team’s success overall, however it seemed she was put into the game just a smidge too late. Already ahead, Northwest finished the last set 25-17.

This loss meant the end of the road for Horizon Honors, however their final ranking isn’t one to be ashamed of. They finished the Championships tied for fifth place in the entire division. The girls on the team are not keeping their heads down about their loss, but rather using it as motivation to work hard for next year’s State Championships. They ended their season with a total of 16 wins and three losses.