A Win Against the Patriots: Sorry, Not the Super Bowl

The Horizon Honors’ Eagles ended their season with a win against Grace Community Christian’s Patriots and, luckily, no deflate-gate. 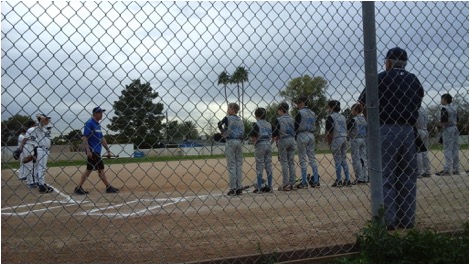 The players of both teams meet around the baseball diamond, encouraging fair sportsmanship. The Horizon Honors’ Eagles won with a score 13 runs to three.

On Monday, Jan. 26, the Horizon Honors’ middle school baseball team played their last game of the regular season at Grace Community Christian at 3:30 p.m. Hoping to find a win to end their season, the Eagles were ready to play.

The game began with Horizon Honors up to bat, but started rather uneventfully for both teams. A caught line drive and a play from Grace Community’s shortstop to first baseman brought Horizon Honors to two outs within the first two batters. Although Bryan Kalmer made it to third, the half-inning ended with a caught fly ball. Despite two singles, the inning ended due to three straight strikeouts, thrown by pitcher Jake Matise. The inning ended with no runs for either teams.

Hoping to put a couple runs on the scoreboard, Horizon Honors began the inning positively. Matt McBride hit a single but eventually scored, giving Horizon Honors the lead. Following a strikeout, Ben Rafalski made it on base on a dropped third strike, eventually scoring home, especially due to Goran Swansiger’s ground rule double. However, the half-inning ended after a caught pop-up and play between the pitcher and first baseman. Like the previous inning, this inning ended after three strikeouts, with Horizon Honors in the lead 2 to 0.

With their lead, the team proceeded more confidently into the third inning. Getting one out with a caught fly ball, the team was not expecting what happened next: Kalmer hit the first out-of-the-park home run – the ball going as far as 260 feet. However, this half-inning ended much too soon with a caught fly ball in deep center field and tag-out at third. The rest of the half-inning was short with three outs in a row: a play between the pitcher Matise and first baseman Hookom; strikeout; and caught fly ball by Adam Paniagua. The third inning ended with a score of three runs for Horizon Honors to no runs for Grace Community.

The Horizon Honors’ team furthered their lead with a scored run from the first batter Brett Hogan. A strikeout and two caught fly balls ended the inning, making it much shorter. There was another three batter inning with a quick succession of three outs: a caught fly ball by Paniagua, strikeout, and tagged out in a play between Deming and Kalmer. The good defense of Horizon Honors helped to continue their lead with a score of four runs to zero runs with the Eagles in the lead.

Heading to the fifth inning, the team had their confidence from many of the memorable moments in the game before. Three singles led to three batters – Matise, Kalmer, and Blake Hookom – scoring runs, increasing the difference in runs between the teams, but a pop fly caught by the pitcher and two strikeouts ended their winning streak. The Patriots were able to score on two singles and a bunt; luckily, the inning ended quickly a strikeout, play between right fielder Christian Rivers and first baseman Hookom, and caught pop fly by Matise, ending the inning with a score of seven runs to three runs and Horizon Honors in the lead.

The team began their sixth and final inning on a positive note. A triple hit by Swansiger, single by Blake Benefiel, walk by Ben Deming, triple by Kalmer, single by Hookom, and triple by McBride all resulted in runs, ending the inning due to the mercy rule. Applying their success in offense to the defense, the team had three outs across four batters: a play from second baseman Hogan to first baseman Hookom, the tenth strikeout thrown by Matise in the game, and a play from shortstop Kalmer to second baseman Hogan. The game ended both due to time and mercy rule with a score of 13 runs to three runs with Horizon Honors in the lead.

The team ended their season in third place in the league, behind Northwest Christian and Joy Christian, and a record of six wins, two losses, and a tie. The first game of their tournament will be on Thursday, Jan. 29, at 3:30 p.m. against Grace Community Christian.