Home Run for the Eagles 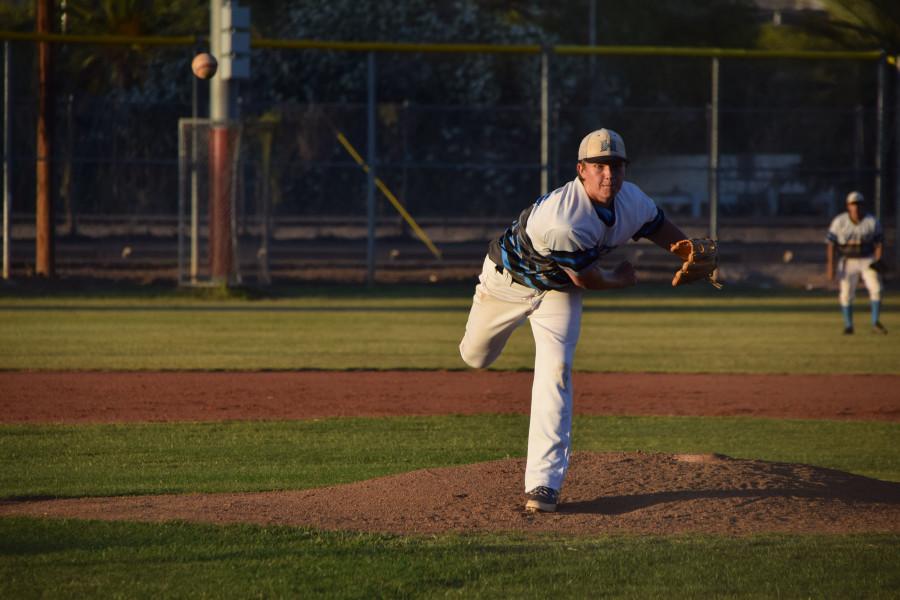 Our Horizon Honors High School baseball team played against Central High School this past Tuesday. April 28. The boys played their hearts out, and came out strong by defeating Central.

Junior Joseph Holguin started off the first inning with a line drive down center, making it to first base. Next at bat was senior Zach Downes. Holguin stole second, and afterwards Downes hit a fly out. With one out, junior Chase Edwards hit a ground out to first. With Holguin now on third and with two outs, senior Bryce Pharr stepped up to the plate. Pharr hit a grounder to third, making it to first and allowing for Holguin to come home. Sophomore Cooper Brown hit a flyout to center, making it three outs. Central brought in one run, bringing the score to 1-1.

To start off second inning, junior Connor Sorrells hit a grounder and landed on first. Senior Garrett Leake grounded out at first, followed by Sorrells getting out at second. With two outs, sophomore Spencer Brown had a strikeout, making it three outs. Central brought in two runs, leaving the Eagles behind by two points.

Third inning started off with sophomore Jacob Johnson hitting a double. Holguin grounded out at first with Johnson advancing to third. With one out, Downes hit a single, followed by Johnson being tagged out at home. Then, Edwards had a solid hit to right field, making it to second and advancing Downes now on third. Pharr came through by hitting a single, bringing both Downes and Edwards home. With two outs, Cooper Brown was up to bat. Brown walked to first. Sorrells then hit a pop out to shortstop, leaving the score tied three to three. Downes threw out a player at second and Edwards struck out a batter. The following batter hit a foul ball, caught by Cooper Brown. Central brought in no runs.

First up at bat for the Eagles was Leake, who hit a grounder to first, getting on base. Afterwards was Spencer Brown, who hit a flyout to center field, leaving the Eagles with one out. Leake then got out by attempting to steal second. Johnson had a solid hit to left field landing him on second. With two outs for the Eagles, Holguin got walked to first, leaving Downes up to bat. Downes hit a pop out, making it three outs for the Eagles. Edwards as pitcher and Spencer Brown as catcher did a great job communicating with each other throughout the game. Central brought in no runs with the score still tied.

Fifth inning began with Edwards grounding out, followed by Pharr striking out. Up next at bat was Cooper Brown, who hit a single. Sorrells had a solid hit, making it to first and allowing for Brown to advance to second. Leake hit a flyout to left field, leaving Central up to bat. One run came in for Central raising the score to four to three with the Eagles behind.

Spencer Brown started off sixth inning with a single. Afterwards, Johnson got a hit to second, getting Brown out, and landing himself on first. Next up at bat was Holguin who hit a line drive to left, landing on first and Johnson advancing to second. With one out for the Eagles, Downes stepped up to the plate. Both Johnson and Holguin advanced a base on a passed ball. Downes hit a line drive that got caught in center field. Edwards hit a flyout to left field, making it three outs for the Eagles. Garrett threw out two runners and Edwards struck out a batter, ending the inning with a score of four to three.

Seventh inning started off with Pharr hitting a flyout to center field. Cooper Brown was up to bat, getting a walk to first. Sorrells followed after with an unfortunate strikeout. With two outs for the Eagles, Leake hit a double and Brown advanced to third. The boys needed only one solid hit to get ahead, and Spencer Brown did just that. Brown hit a line drive down left field, allowing for both boys to come home and Brown getting out at third. This put the Eagles on top. Edwards had two strikeouts and Leake threw out a player at first, ending the last inning.

The game ended with a final score of 5-3, bringing their record to 12 wins and 9 losses. So far the season has gone great for the boys, and they’re looking forward to their final game tomorrow. The game is taking place at their home field Papago Park on Apr. 29, at 5 p.m. against Veritas. Come show your support!