Devin Booker douses Dallas with an incredible shot against the outstretched hands of Josh Richardson in the closing seconds of the game. 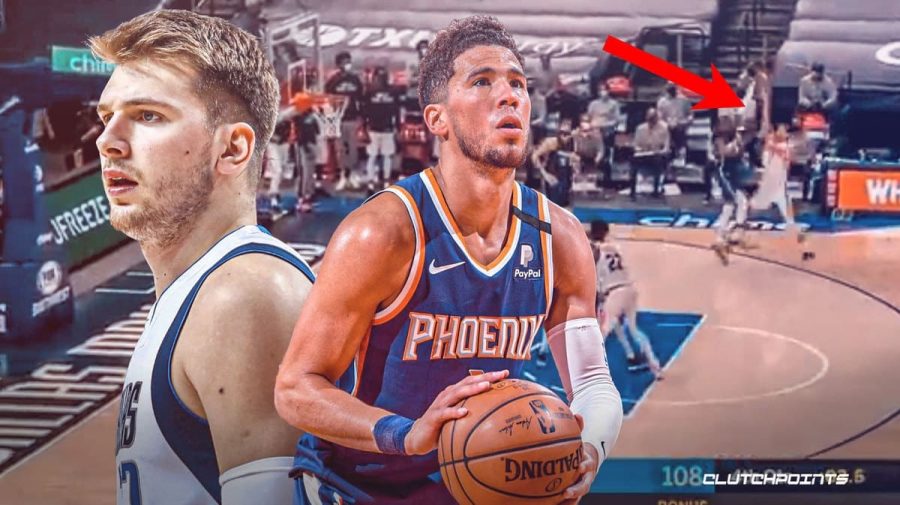 With only a second left in the game, the Suns won the game by a hair.

The Phoenix Suns played the Dallas Mavericks on Monday, Feb. 1, 2021 in the American Airlines Arena in Dallas. Both teams came out of the locker room fired up and each team scored 22 points by the end of the first quarter. In quarter two, it was all hands on deck for Dallas, who managed to outscore the Phoenix Suns by six points going into halftime. The third quarter brought despair for the Suns, who fell victim to a Mavericks lead, but managed to claw out of the pit. The Suns were only down by five at the end of the 3rd quarter, leaving the score at 77-82.

The Phoenix Suns and the Dallas Mavericks kept racking in points later in the fourth quarter, shot after shot, seeming almost effortless with Chris Paul nailing mid-range jumpers left and right. On the other end of the court, Josh Richardson and Luka Doncic kept scoring points with 7:56 left in the fourth quarter. Langston Galloway of the Phoenix Suns cashed in a three-point shot, leaving the score with the Suns up by five. The Dallas Mavericks managed to come back and gained the lead by two points. With 1:21 left in the fourth quarter, the Suns managed to tie the score with 55.7 seconds left in the game. Deandre Ayton of the Suns committed an off-ball foul, putting the Mavericks’ guard Josh Richardson to the free-throw line, where he shot with beautiful accuracy, putting the Mavericks up by two with 49.0 seconds left. The Suns hustled down the court and missed a shot, while the Mavericks rebounded and went down the court and hit a 24-foot three-point jumper. Ayton got a defensive rebound pass to Chris Paul, who missed a wide-open layup with 14.2 seconds left. Ayton got an offensive rebound, shot a tip shot, and missed, where he then grabbed his own rebound and got blocked by Kristaps Porzingis. There was only 11.9 seconds left when the Sun called a timeout, leaving just above 10 seconds. Once in play, the Phoenix Suns passed the ball to Chris Paul, who dribbled the basketball and then passed to Devin Booker who Rips the Rainbow with 1.6 left to go. The Mavericks called a time out and then passed the ball to Doncic who shot and missed a 28-foot three-point shot to end the game, with the Suns winning 109-108.