“DOWN WITH THIS SHIP” Release 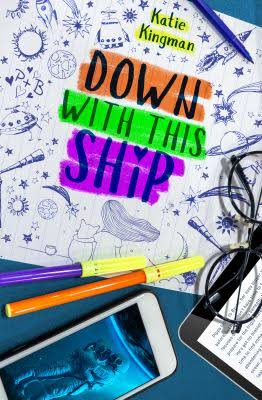 Horizon Sun: What is “DOWN WITH THIS SHIP” about?

Katie Kingman: DOWN WITH THIS SHIP is my love letter to fandom essentially. It’s about a girl who’s a secret celebrity in the fan fiction world and what happens when that secret gets out at her high school—and in the hands of her nemeses in her Creative Writing class. Kole has to get her blog back from their diabolical hands through a series of quests, and if she doesn’t, they’ll destroy her work.

HS: What is the intended audience for the book, and where can readers find it?

KK: Anyone who knows what it’s like to lose sleep over their OTP (one true pairing) or get antsy throughout the day because there’s a new episode of their show on that night. It’s for the fanatics, but age-wise I’d say it’s for 14+. If you’re not into fandom, I hope it can be a fun story to escape into during our hot summer. It would make a great beach read — lots of drama and feels. DOWN WITH THIS SHIP can be found on Amazon, Target, Walmart. In stores, it’s at Barnes & Noble and Changing Hands.

HS: What was your inspiration for writing the book?

KK: I posted on Twitter about a ship that I love that happens to be on a rather polarizing show. Then I posted that I told my students to watch the show. Some fans that don’t ship my OTP started to drag me and say that I must fail students that don’t ship my OTP (can you follow that? Ha!) . I logged out and stayed off of social media for a bit, but it left me with a thought; what if you were the creator of a ship and you couldn’t just log out to avoid the nasty comments? What if you were surrounded by your critics? And that gave me an idea that I followed down the rabbit hole.

HS: How long did different parts of the publishing process take, and which was the most difficult?

KK: So. Very. Long. This novel started from my first manuscript, which is what Kole’s [the protagonist’s] show, THE SPACE GAME, is based on. When that manuscript didn’t land me an agent, I was inspired to write this manuscript and I let my imagination run wild. The last thing I imagined was that it would be published — but I was wrong! I drafted it one summer, then I began querying, which is when you reach out to agents who pitch your book to editors. Rather quickly I signed with an agent. After more revision (revision never ends, truly) I went on what’s called “submission”. That means editors review your book and let you know if they’re interested in buying it. I lucked out when an editor at Flux fell in love with my concept. To sum it all up: I started writing in 2015, got an agent in 2019, a book deal that summer, and now it’s in print in 2021. Books take a very long time from start to finish, but compared to many others, this is a rather fast journey.

HS: What was your favorite part of writing and publishing the book?

KK: Making lots and lots of writing friends from all around the world. Through various contests I made many friendships — some “critique partners” who read and critique my writing, some acquaintances, and some seasoned veterans that I can turn to when I have a question about the publishing world. And the best part is cheering each other on through the many victories that come with this process, but supporting one another through the many rejections that inevitably come in publishing too.

HS: Do you plan on working on other books in the future?

KK: Absolutely! I’m working on both a space opera, and another contemporary that takes place here in Ahwatukee.

HS: Are there any tips you would give to aspiring writers who are hoping to publish in the future?

KK: Start by writing 500 words a day and reading craft books. Read in the genre you plan to write in so that you’re familiar with up-to-date trends. Make connections and do not be afraid of critique! It’s truly the best way to get better at the craft, but you have to find critique partners that you trust with your work first. Vet them and do a swap to see if you’re a good match. Also, be careful about how much you share of your work online. Unfortunately concepts are stolen far too often, but even then your spin will be different from someone else’s, so don’t let it discourage you!

The book is available for any interested readers to buy, and can be purchased at most major retailers. Students at Horizon can also look forward to more books from their Creative Writing teacher in the future.