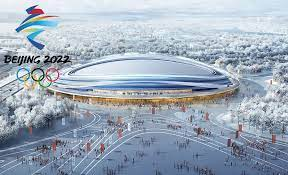 This coming Winter Olympics in Beijing are sure to be exciting.

The 2022 Winter Olympics are coming up in two and a half months. The Olympics will be from February 4 through February 20 in Beijing. The Winter Olympics have been highly anticipated, and they are now finally this year with the most events in history.

This is extraordinary news; however, there are some restrictions. Spectators are allowed, but they have to live in mainland China because of the global pandemic. The stadium will be covered by a bubble because of COVID-19. According to Breezy Scroll, they are also using fake snow this year, which is an enormous expense. They are purchasing 200 artificial snow cannons to cover the mountains and allow the events to take place. Also, unlike proper snow, the artificial snow is made of water droplets that are freezing into little ice beads. The artificial snow can cause some problems for competitors such as skiers, as the artificial snow can obstruct the normal skiing dynamic’s speed and grip.

Bobsleigh: Event where a team uses a gravity powered sled and slides down a narrow path of ice with a bunch of twists and turns- best run time wins.
Skeleton: Similar to bobsleigh- the event revolves around sleds speeding down an icy path. However, only one person is on the sled and is going on your stomach, fast first.

Curling: Two teams of two play against each other on a large sheet of ice. They slide stones down towards their target, where each team has one sweeper to help direct their teammate- you want the stone in the target. The team with the most points wins.
Ice Hockey: There are two teams, and each team’s goal is to get their puck into the other team’s goal using hockey sticks. The team with the most points wins.
Luge: On a one-person sled, the sledder has to use their shoulders for momentum and steering along the icy path. The fastest time wins.
Skating

Alpine Skiing: This event tests the athlete’s ability to ski down snowy hills with obstacles. The fastest time wins.
Cross-Country Skiing: Contestants wear skis and ski poles and propel themselves across the flat terrain. The fastest time wins.
Freestyle Skiing: Contestants take vast jumps off a slope; some perform aerial tricks and flips, others dive. Best score by the judges wins.
Ski Jumping: Ski jumping is where divers jump off a large slope and continue to ride down once hitting the ground. Whoever has the highest score, determined by judges, wins.
Nordic Combined: This event is a combination of cross-country skiing and ski jumping. Contestants jump off a slope and ski past obstacles. Whoever completes the course first wins.
Snowboarding: A snowboard is attached to the contestants’ feet as they ride down hills and go past obstacles. The fastest time wins.

The Winter Olympics are a topic of excitement for many people. Despite mixed opinions regarding the artificial snow and who can actually attend the event, it seems like this year will be a great new start to the Winter Olympics.