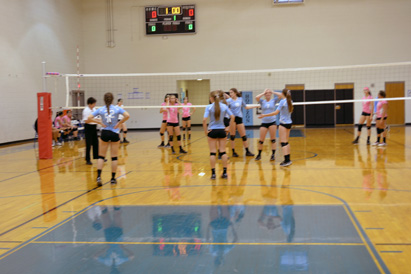 The opposing team Yuma Catholic (in pink) and Horizon Eagles in blue set up for the last home game. The final set ended 25-23, way to go Eagles!

On Thursday, Oct. 30, Horizon Honors Varsity team had their last game of the season. The team and audience celebrated Savannah Cunningham and Timberlyne Ziuraitis and their achievements for senior night. They both received flowers, a present, and balloons from the team. Junior Danielle Moran, number 18, sang a beautiful performance of the National Anthem, and the game began.

Horizon Honors’ Varsity team played a great game, winning in three out of five possible sets. Ziuraitis said ,“I’m really sad [that this is the last game of the season]. But I’m excited for sectionals. I think we all are.” Everyone seemed to agree that they were excited. What a special way to end the volleyball season for Horizon Honors.