Double Wins Against ALA 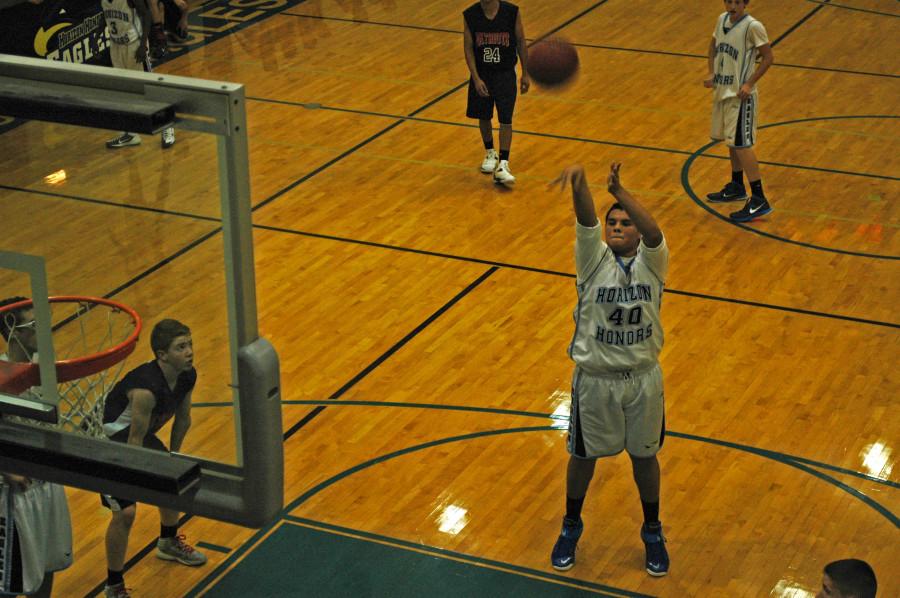 Jared Gates hits a Free throw during a game versus American Leadership Academy.

On Tuesday, Dec. 9, from 2:30 to 5 pm, Horizon Honors’ JV basketball teams competed in two games, winning the first for girls but losing the second for boys. A crowd of people came to watch, cheering on their teams. Everyone was ready for Horizon Honors’ third game of the season.

“It’s really fun to play with such an awesome team,” says freshman Kenzie Nippers, who was practicing her skills and encouraging her teammates.

As the buzzer rang, the girls began to play. Shoes squeaked, people cheered, and shouts rang out. At the end of the first quarter and several strategic tactics, Horizon Honors took the lead with 7-2. The Horizon Honors’ girls were pumped and ready to bring the school another win. Then, after many dives, free throws, and outs, they amped up the score to 13 to 2, ending the second quarter with a positive note. Several minutes of cooling down and doing drills, the half-time ended, and the third quarter began. Seconds after it started, we score again, getting a loud cheer from the audience. This keeps up, and the third quarter ends with 15-7. The girls were ready to finish this game with a win. The other team started shouting every time they try to score, but this didn’t stop them. Horizon Honors’ JV girls won the game with 23-13, with the audience excited.

Now, the JV boys started warming up, drilling and receiving encouragement from the audience.

The boys took off, our opponents getting possession of the ball. Even though our boys played well, there was still something off. They ended the first quarter with 2-12 in American Leadership’s favor. The second quarter also seemed to show some miscommunications, leaving them with 10-29, once again in the opposing team’s favor. Half time returned, and they drilled again, making plans and trying to recover. Alas, they still were behind, with a score of 24-38. The game ended with 26-44, with us losing.

In the end, Horizon Honors’ girls took home a win, while the boys had lost. Both teams did very well by fighting through the hardships and the crowd was putting a positive foot forward. They are confident that the next game would be successful, for both teams.