Homestuck, The Best Story Ever? 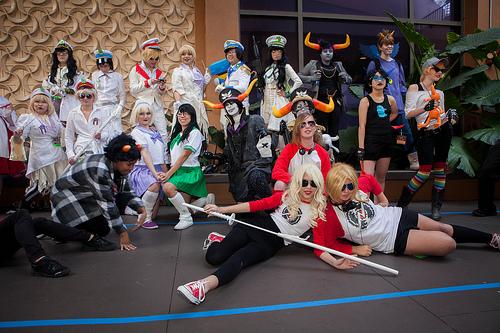 Homestuck is a cultural phenomenon that has swept across the internet and created one of the most popular and currently running web comics of our time. It created a cornucopia of fan-driven content that only enhances what it has already done so well. So what makes it such a cultural juggernaut in today’s world of rapidly updating information? In a sense, the creator of the story, Andrew Hussie, has formatted the perfect story that no other can compete with.

Personally, what really drew me into Homestuck was hearing all of my friends talking about this incredible world where kids had to fight monsters, solve puzzles, and interact with obnoxious, yet helpful, alien life forms known as trolls. This character interaction that Hussie uses is really his most powerful tool in the story. He has created over two dozen unique characters that all have greatly defined individual personalities. There is hardly any over lap of how characters interact with one another so you would rarely ever see two characters respond to something in the same way. This can really give the reader a strong sense of connection to a character that they sympathize with or hate.

Another appealing aspect of Homestuck is its length. Now before you flip out and say, “It has over 7,000 pages! How is that appealing?” remember that this is another way to bring more life to the story. All of the time that the reader spends on each page is expanding their knowledge of the Homestuck universe and is helping them to discover new and interesting details about the story. I have found that if something is there, it is important. If there is a mail woman a mayor and a guy with a wrapped in caution tape in the middle of a post apocalyptic desert and they are walking around collecting glowing rocks standing around giant cans, it becomes important. Even if you don’t find out why it’s important for another 300 pages, it will all be revealed, and this immaculate revealing is another reason why Homestuck is so powerful. It really gives the readers that “Ah Ha” moment when they finally figure out what is going on.

Yet I still believe Homestuck is at its best when you don’t know what is going on. My favorite part is when Hussie presents lots of information with little to no explanation of what is happening. Then you really get that sense of “Oh my gosh, what just happened, I need to call all of my friends and figure out what the heck  just appeared on my computer for 56 seconds.” These massive introductions of information are often done through the use of flash videos accompanied with great music created by some awesome Homestuck fans.

Most of the Homestuck’s fandom resides on Tumblr, where people post their fan art, cosplay ideas, speculations, fan fictions, talk about their ships and so much more. This central hub for Homestuck people is good for the serious and casual reader. You can ask people about what they think of your favorite character pairing, or how your favorite character died and then came back to life. You don’t have to have a shrine dedicated to the series in order to enjoy it, you just have to find a group that likes it on your level, and obviously a casual reader will not want to talk to a group of people who dedicate their lives to it. So in order to find a niche in Homestuck, talk to people who have a similar level of interest, which is usually determined by the initial group that introduces you to the series, so most don’t encounter a problem.

So here we are approaching the end of this incredible epoch and what can we say about it? It has an ingeniously developed group of characters, clever writing, suspenseful moments, great music, incredible fan art, nearly an endless amount of fan generated content , merchandise for both cosplay and just plain memorabilia, a friendly creator, a strong fanbase, extreme action, intense mystery, corpse parties, mysteries aliases,  and some laborious romantic tension. Perhaps Homestuck is the best story ever.