Physical Education: A Tale of Woe and Sorrow 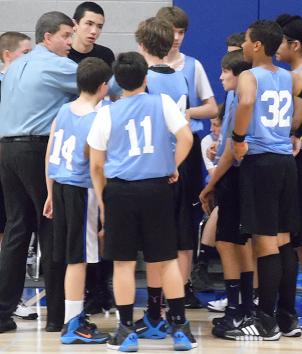 A Boys’ B team basketball game, which is a voluntary after-school activity. Some people are not athletically inclined, which makes systems like this perfect for a person who doesn’t want to participate in sports.

Envision this: You are an athletically challenged student.  You can’t run, throw or catch, hit a ball with a bat, toss a frisbee, anything.  It is then that you are thrust into an insane sports game, where people expect you to use your nonexistent skills to put a giant orange ball through a hoop.

Welcome to your worst nightmare.

Now, try this every single school day from the sixth grade down.  In freshman year, I’ll be forced to do it again. The torture of this is unimaginable.  You are tackled continuously by a large group of sweaty, disgusting boys, you have basketballs hit you in the face (but since you’re tough and are also trying to protect the remnants of your image, you don’t cry), and you burn through those horrid side stitches and want so badly to just collapse and weep for your misfortunes.

It’s not as if you’re going to stay healthy through P.E., although I can understand why an adult would think that.  What the experience actually is, for me at least, is like having your self esteem burned at the stake and then having its ashes thrown out into the middle of the Bermuda Triangle to settle in the midst of all the shipwrecks at the bottom of the ocean.  Alright, fine, okay, maybe it’s not that bad, but it’s still pretty bad.

If you haven’t had enough, try being the last person picked for a team.  No one wants you.  They don’t realize or appreciate the fact that you’re trying so hard to do well, which finally makes you give up and become a cynical, sweaty wreck.

Do you have any idea how that tears a person apart?  When even your friends pick the people that they hate over you?  I don’t understand why I, or anybody like me, should have to be put through that.

Now, although it probably seems like it, I’m not saying P.E. is all terrible.  I think it’s fine that the athletes or wannabe athletes can enjoy it, but for the people who absolutely cannot?  Just, no.  We shouldn’t be forced to go through any experience where the teacher picks you for an example in frisbee, and you throw it and it hits a kid in the face (true story).

It’s comparable to putting a kid who can’t sing in choir, a jock who can’t play trombone in band, and a teen who can’t cook in Culinary Arts.  I realize that you’re in a class to learn, but I also feel that sometimes you just can’t learn a skill.  After all, you’ve got to want to do something to do well in it.

P.E. should never be required if there is ever a student who is outrun and left behind.  It shouldn’t be mandatory if a kid just can’t keep their eye on the ball.  It should, however be available to choose, but still never ever ever ever part of a compulsory curriculum.