Recently announced “Big Hero 6” is sure to be yet another Disney hit, but does it deserve it? Ever since the move to computer animation, the company seems to be lacking in character originality. 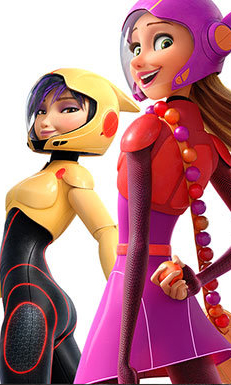 While Disney continues to produce movies with good plot and characters, their female design remains unoriginal since their swap to computer animation. Now the newest girls on the Disney team seem copied from “Frozen” and “Tangled.”

Sounds great, right? Well, maybe. Since the movie hasn’t been released yet, we don’t know. But with only trailers and TV spots to sustain me, I’ve already started drawing up my views on it.

As soon as I saw promo material of Baymax, a “soft robot” who is caretaker of Hiro Hamada, a technologically savvy 14-year-old, I was sold. He was squishy, awkward, curious, and called a cat a “hairy baby.” What’s not to like?

The people are what irk me. Now, Hiro has a simple character design. He was made to look average, and I like that his look didn’t seem to be copied from previous animated characters. He wasn’t created to look perfect. After all, his hair can certainly be considered a mess by some people, and he has a gap between his two front teeth. But that’s incredible.  He’s human, because humanity doesn’t equal perfection.

Let’s take a look at Fred, our everyman, or teen, as it were. He’s a bit of a comedian. He’s a bit of a fanatic. He’s pretty much like every teenage boy out there, to generalize. But he’s got a great face that isn’t extremely handsome or anything, and he’s got nice hair that’s not completely “in” and is, to repeat, the everyman of the group. Verdict: good character and design.

And here comes my favorite: Wasabi. This guy right here. Look up a picture of him. Take in his nose, his eyes, his skin, his height, his hair and just go ahead and give a cheer. Then make sure you remember that he is a touch neurotic and OCD. Look at how they’re breaking the stereotypes! He looks like a football player, and yet he doesn’t behave like the stereotype that people have created.

Now we come to the girls, who both astound and disappoint me. We’ll start with Honey Lemon, who I find is the better of the two. I’m drawn to her charisma and quirky fashion, but at the same time I’m just a little sad at her similarity to Rapunzel, from the hit Disney movie “Tangled.” The big, green eyes, the eyebrows, the nose, it’s too similar for me to be comfortable. I’m happy about her, but she’s not where I want her to be.

Now for GoGo Tomago, who I am very upset about. Her entire face seems to be exactly like “Frozen” character Elsa. They’ve got the same sloped nose (which is a bother to me in itself), the  same facial structure, placement, everything! Again Disney has put out another look-alike. She might as well be Elsa’s sister if they are going to be made to look so similar! I like Tomago’s body shape, which is short and curvy, but her features are just too much for me to be satisfied with the overall design.

So what went wrong? I don’t know. Some say that their hesitance in female originality spawns from the will to save money, but last I checked, Disney had cash to spare. Another theory I am more willing to believe is that the animators find that they have to keep women beautiful by keeping them the same. Lino DiSalvo, head animator of “Frozen,” stated that, “Historically speaking, animating female characters are really, really difficult, ’cause… you have to keep them pretty… having a film with two hero female characters was really tough… having them both in the scene and look very different if they’re echoing the same expression…”

They say they’re trying, but it sure doesn’t seem like it. Ever since the riotous switch from hand drawn to computer animation, Disney’s been going downhill in their design. I just wish we could travel back to the days of “Cinderella” and “Beauty and the Beast” and “The Princess and the Frog” when the females looked different.

I take a look at background characters in “Frozen,” and I see beautiful people who don’t all look the same. Why doesn’t diversity translate to the main characters? Nobody really knows. Maybe someday there’ll be a girls with more than a big eyes and a sloped nose. Maybe she’ll have a big mouth and thin hair, and maybe then Disney will realize why there needs to be a search party for their design department.