The recent influx of penalties in this year’s football season has fans of the game frustrated. Is there a method to what may seem like madness? 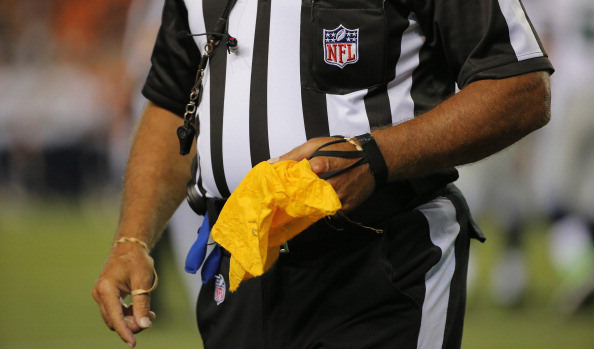 The amount of penalties in the NFL and NCAA have skyrocketed this year, and new policies are to blame.

If you are a football fan, you have most likely noticed the seemingly dramatic increase in penalties this year and experienced the frustration when your favorite team loses due to penalty flags being thrown for almost no reason at all. This issue is prevalent in both the National Collegiate Athletic Association (NCAA) and the National Football League (NFL). No doubt about it, these frequent penalties can be a nuisance for the followers of the game affected by this every Sunday afternoon.

This season, both the NFL and the NCAA have seen a spike in penalties – but rapid raises in penalties have been prevalent in the past in the NFL and in college ball. Usually, those sudden increases are accompanied by new standards or rule changes in the game. As the NCAA and NFL have slightly different regulations, it is not uncommon for regulations on one level to be adapted into the other. Take the two-point conversion for instance. It had been in the NCAA since 1958, but the NFL did not adopt it until 1994. Rule changes like this wouldn’t necessarily create penalties, but the effects can change games. For example, the NFL has told officials on numerous occasions to tighten up their policy on specific penalties. This year offensive pass interference and illegal contact are on the rise, due to the NFL stressing that officials need to be less lenient. According to Business Insider, the NFL’s new illegal contact policy has made any contact after five yards from scrimmage an automatic penalty, regardless of if the foul affects the outcome of the play. This became evident in the preseason, as illegal contact penalties increased by 450 percent. This can explain why some of the game’s enjoyment has been taken away.

As good as protecting the players may be, I believe some officials have been going overboard on what they consider to be a rule violation, and too much of one thing can be just as bad as too little. As for the new policy on illegal contact, I believe that it is too exaggerated. On a decent number of the plays where the illegal contact penalty was called on the defense, the contact was initiated by the offensive player. However, the officiating is improving, and there is reason for the increase in penalties. Also, what may look like a terrible call to the people watching the game on TV can actually be the correct call in some instances. After Notre Dame lost to the undefeated Florida State on Oct.18 and Notre Dame’s game-winning touchdown was reversed, fans of Notre Dame and Notre Dame coach Brian Kelly were outraged. At first I didn’t understand the call myself, but after going back and rewatching the play, I realized that the correct call was made. Replays clearly showed an illegal block made by an eligible receiver before the ball was caught, which is another new rule. Receivers are no longer to initiate contact with defenders if the pass is not going to them. Sometimes the best way to combat frustration from what you think is bad officiating is to study the play yourself, while also being aware of the new regulations.

The increase in penalties still can be very distracting to the viewer, both on TV and in person at the game. The new policies may be a bit extreme to some, but the officials are just following the new rules. I do not completely understand why it was necessary to put these new policies in place though. There have already been a fair amount of penalties in games, and now scoring is higher as a result of the drastic raise in flags being raised. Most of the new policies affect the team on defense, allowing the offensive team to receive free yards, putting them closer to scoring with each call.

The bottom line is that the officials are not necessarily to blame for the increase in penalties. They were told to be more strict, and they delivered. I still believe that the amount of penalties in both the NFL and NCAA needs to be toned down so the players can get back to playing the game.