I’m a Survivor of the Mrs. Carter Show 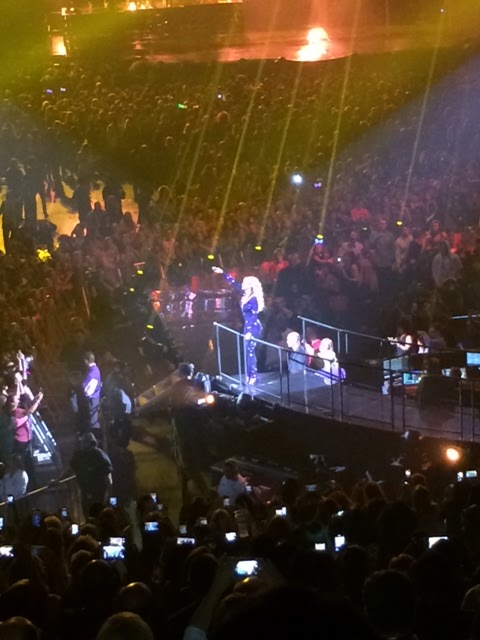 Beyonce let the fans take over during her song Irreplaceable. Arizona was stop 13 on Beyonce’s sold out world tour.

It was 4 p.m. on December 7, 2013 when countless fans started lining up for the sold out 8 p.m. Mrs. Carter show featuring Beyoncé. I didn’t feel like waiting out in the cold for hours, so I headed across the street to the Hard Rock Cafe to grab a bite to eat and watch as the lines grew into a mob in front of the US Airways Center.

Security was in a frenzy as the mob of fans grew exponentially as more time passed. Fans were supposed to be seated by 6 p.m., but the doors didn’t open until about 7:30 pm. Anxious and eager to get to inside, I bolted to the merchandise stand to get a shirt before the show, and then headed to my seat. Even though I was expecting them, the high prices of the merchandise were still a let down. I paid eighty dollars for two tank tops, which were the cheapest items for sale. It was a bummer, but it was my only complaint.

She opened with a clip that played on the main stage screen where she was sitting in a throne and was crowned as the queen, which set the mood for the whole show. They had a large screen that stretched across the whole stage and two smaller screens on the sides. No matter where you were in the stadium, you had a clear visual. It helped me to feel more involved with the show. Once crowned, the stadium went dark for about thirty seconds, and then fire came bursting out of the stage. It was a hard to focus on just one thing, because so much was going on. One dancer at a time emerged from the bottom of the stage and finally Beyoncé rose from the floor. That’s when all the theatrics stopped being random and revolved solely around her. She opened with songs from her most recent album and then digressed to her Destiny’s Child days. In the moments that I wasn’t fangirling, I was belting out the song from the top of my lungs with the rest of the audience. The sound quality was pristine and to the point. Her vocals were easy to hear and enjoyable, even with over the 5 thousand other voices singing along with her.

It was a very pleasant to hear her sing live, because her voice is the same quality as her studio recordings. Even with acoustics or acappella she sounded like the Beyoncé I listen to in my car every morning.

Throughout the whole show she had at least 10 outfit changes and different themes. From “Countdown” to “Survivor,” Beyoncé always had the crowd on their feet.

As someone who’s been to multiple concerts ranging from The Jonas Brothers to Motley Crue, I can confidently say that I’ve never  experienced a concert so well put together with theatrics, smooth transitions from song to song, and costume changes.

The Mrs. Carter show by Beyoncé was the type of show that in twenty years you can still find me telling stories about.

It wasn’t just a show, it was the show.