Holiday Cheer for All to Hear

On Friday, Dec. 11, Symphonic Band performed their last concert of 2015, a holiday-themed event that was both cheerful and elegant. 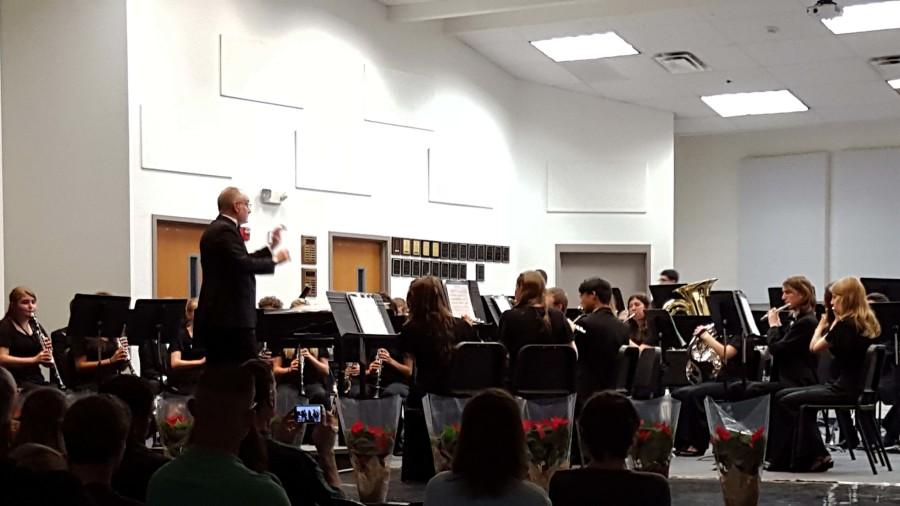 Symphonic Band celebrated the end of 2015 and the coming of the holidays by having a holiday-themed concert.

At 6 p.m., on Dec. 11, Symphonic Band finished warming up, and Brian Murphy introduced the students. Poinsettias bought by parents lined the stage, creating a festive atmosphere. Three of the four songs were Christmas themed, except the first, which was called “Italian in Algiers,” which began promptly.

This song was quite lengthy, about 15 minutes long, yet it was still a performance that captured the audience. The movement started slowly, then became quicker as the piece went on. It flowed well, and the melody was played primarily by flutes and clarinets. Overall, the song was quite peppy. It carried an air of professionalism as well. The long piece ended with a symbol clash, and who doesn’t love that? Freshman Monica Ganev, a student in the band who plays tenor saxophone, also said it was her favorite song to play because of its length and how “it was a more challenging piece” for the students to learn, according to Ganev.

The next song was “A Winter’s Carol,” a variation of “O Come, O Come Emmanuel.” The melody was played on various instruments in different pitches, while other instruments included long notes that accented certain measures of the melody. It was haunting and elegant, featuring chimes throughout the song.

Next up was “Pat-A-Pan,” a cheerier tune than the previous piece. It started with the sound of sleigh bells and a popping noise, which remained throughout the whole song. The flutes picked up a bright melody, and the low sound of drums added another layer to the movement. Underlying deep notes from various instruments added a nice contradiction to the higher notes of other wind instruments, and soon the deep drumbeat melted into the sound of a higher-pitched drum. All of the previous melodies congregated, then receded into silence as the movement finished with the jingle bells.

The last song of the concert was “Carol of the Bells,” a classic that everyone knows well. Since the piece needed more power, there was more movement in the band, and the students seemed to enjoy playing the song. Another member of the band, freshman Coral Milliard, loved this one as well. “The ‘Carol of the Bells’ arrangement was really cool though, too. Different parts were played and they all went together really nicely,” Milliard stated.

The audience applauded the band at the end of the concert, and the band seemed proud of their hard work. Congrats to Horizon Honors’ Symphonic Band for a show well done.