The Graphic Design students at Horizon Honors have spent a quarter creating the school’s new design - the Horizon Sun gets an inside scoop on the adventure, from the high points to the low. 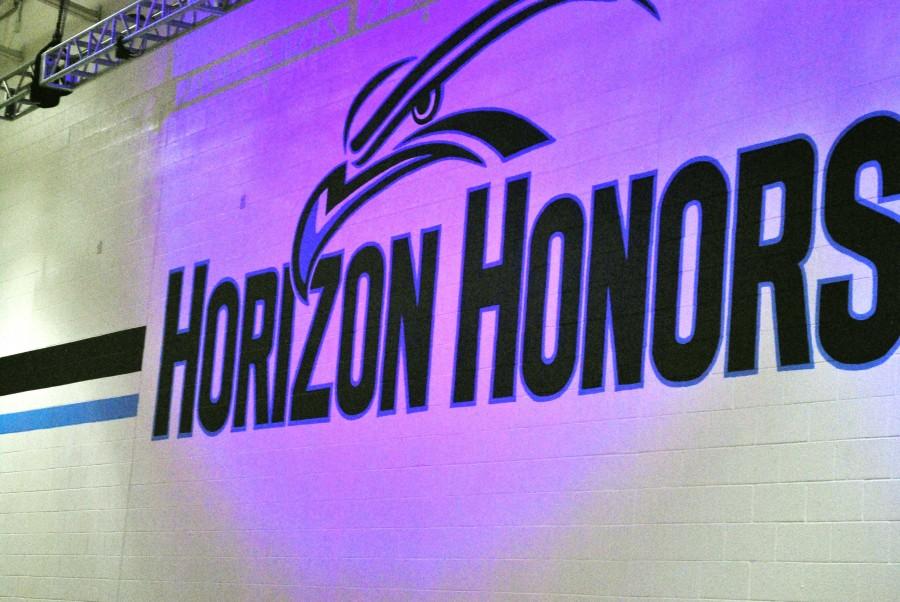 The new Horizon Honors logo shines bright after its big reveal at the pep-rally.

Last week’s pep rally revealed the new logo for Horizon Honors – made by the Graphic Design team, hand-in-hand with the heads of the school. There were a multitude of students involved in the process, each with varying experiences. A few students were willing to share their opinions and participation in designing the updated version of the logo.

When freshman Mauren Tagg (in Graphic Design 5-6) first heard she would be taking part in creating the new logo, she was both shocked and excited to be taking part in such a big task. She knew the team “could really make something awesome.” As for another freshman, Cat Scolaro (Graphic Design 5-6), she was a little anxious about the amount of work they’d have to dedicate to the logo, but she was also excited.

As the two classes sent ideas down to the office and received feedback, the students would create their own designs and work from what they received to get to the final product that now decorates our gym. Tagg stated that Betsy Fera loved the design of the athletic eagle, so they went with a design similar to that one. The fact that there were two blocks also meant there was definitely a rift in communication. Christi. Britt, the Graphic Design teacher, was definitely a big help in keeping the two blocks together and in check until the end.

As for Britt, her involvement was crucial to the accomplishment of the project as the students developed their ideas. “They worked so hard on every line and angle, and I can’t even tell you how much effort they put into the beak,” she stated, proud of her students. Britt was happy to see how inspired they all were and that the whole project was something magical to see and witness come to life. And, another thing to note, is that these students put in so much effort and didn’t get a grade, credit, point, or anything for designing the logo. It was all dedication that created the design of Horizon Honors’ logo.

For the Graphic Design students, this is a project that they’re all proud to be a part of. As Tagg said, “everyone is going to see this thing.” The logo from 1996 has finally been cleaned up and is a wonderful new addition to Horizon Honors.