The Masque: An Evening of Theater

The Masque: An Evening of Theater isn’t like any other show. 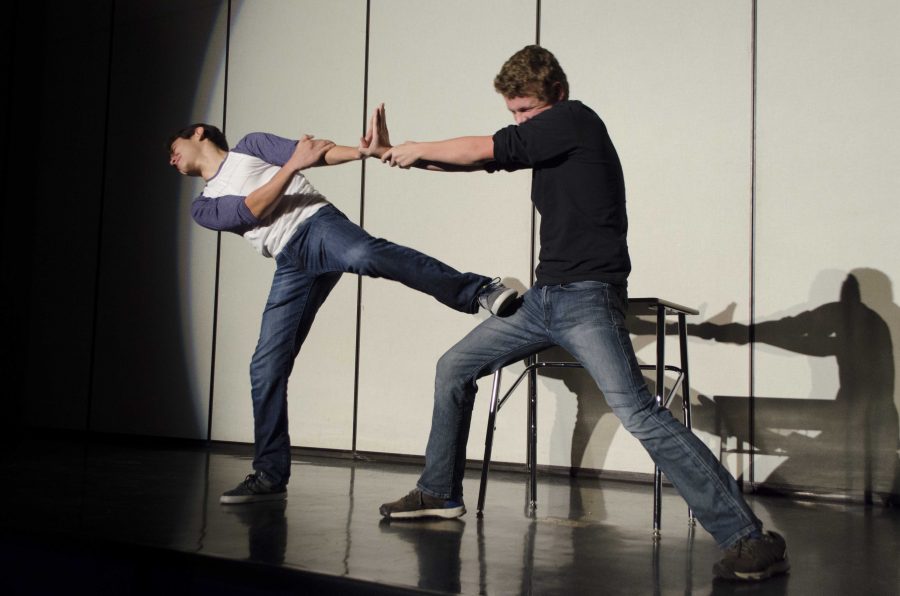 "The Masque: An Evening of Theater" exhibited some of Horizon's most talented actors.

On Wednesday, May 18, the Horizon Honors’ drama students presented an evening of theater in the MPR. Some of the drama students, of all levels, performed either a monologue or a scene. The Masque began at 6 p.m. when drama teacher Ann Shaheen gave welcoming remarks and explained how she was able to experience seeing the growth of each student in her class. Then, senior Noah Weiss gave an introduction to the selection of monologues and scenes that were soon to be performed. The seven lovely monologues and scenes that were performed had much variation from deep and confusing thoughts to dramatic confessions.

Some of the performances had people dying of laughter, and most of the audience were ready to see what was next. Then, senior Anna LaBatt talked about the importance of knowing who your character is and what his or her objective might be. The next six performances helped give the audience different ways to say “no” and how true love is a stressful topic.

After a ten-minute intermission, everyone returned to their seat and were ready to see what was going to be performed next. Those performances were all about expressing emotions and the art of storytelling. There were many emotional pieces such as “Dear Dad,”  performed by eighth grader Camryn Marshall. The monologue was about a young girl who was writing a letter to her dad that is in jail and how she had to overcome many obstacles without him being there for her.

The last seven pieces of the evening were very entertaining since it allowed many of the actors to challenge themselves and bring life to “unfamiliar languages such as Shakespeare.”  The closing remarks were made by Weiss and the audience gave a big round of applause for all the talented students.

What was your favorite part of the night?

Evan Mills: “My favorite part of the night was getting to watch my friends perform, succeed and have fun up on the stage.”

Amber Fretwell: “My favorite part of the night was seeing other performances from the other classes.”

Abraham Newsum: “My favorite part was seeing the scene that I had already done performed by someone else.”

Do you have any favorite monologues?

EM: “My favorite monologue was ‘Dear Dad,’ performed by Camryn Marshall, because she did such a good job and it had a lot of emotions.”

AF: “I didn’t have a specific favorite monologue, but all of them were equally as good.”

AN: “My favorite scene was definitely ‘Ebenezer Who.’ It was a scene about the ghost of Christmas Past accidentally going to the wrong house at the wrong time.”

EM: “I like acting because it gives me the chance to become something I’m not for a short period of time and that I am able to experience a lot of different perspectives.”

AF: “I like acting because it is fun to be someone who I am not with different emotions.”

AN: “I enjoy acting because it is a great hobby and is very fun to do.”

What do you like most about your drama class?

EM: “I like that I can feel comfortable in my own skin and I can express myself.”

AF: “I like seeing my other friends having fun and trying new things with me.”

KC: “I like that my drama class is fun and funny.”

AN: “I like how I can make friends with almost everyone in the class and I also like the fact that there are many different levels of actors in one class.”