Horizon Honors’ sophomore Kamryn Chan competed in the “FIRST” Robotics Championship and brought home a win for the team. 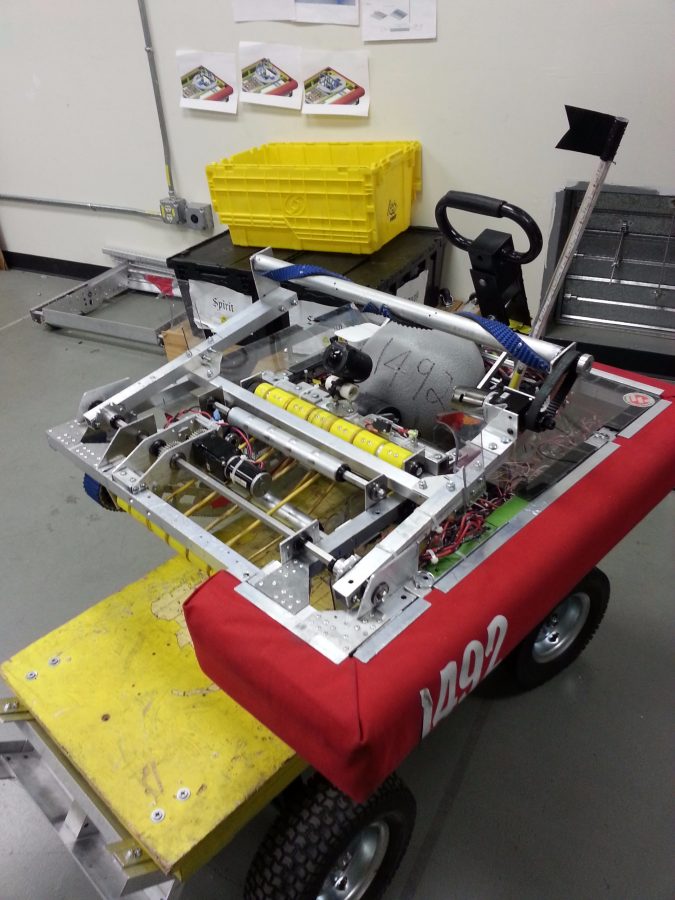 Kamryn Chan's robotics team won their competition with this robot.

Sophomore Kamryn Chan had the opportunity to compete in a robotics competition on Oct. 22, where she and the rest of her team won the AZ For Inspiration and Recognition of Science and Technology (FIRST) Robotics Championship at Arcadia High School. Chan has been with Team Caution since January and has enjoyed building unique, remarkable creations with her team. Chan is known for creating obstacles for the robots to practice on for her team. FIRST is considered one of the oldest and largest youth robotics team in the world. High school students participate in a one-of-a-kind competition, using problem-solving skills to become future innovators, science and technology leaders.

The Horizon Sun: In your robotics group, what do you primary work or focus on?

Kamryn Chan: For me, I am not totally good with all the metal and everything so I work with wood and I build obstacles for the robots to practice on.

The Sun: Where do you get the materials from?

KC: Sometimes, we have fundraisers and gain money for ourselves to buy the materials and we have sponsors like Microchip and they help us out with that.

KC: I’ve always liked working with things and putting things together. When I heard about robotics from my neighbor, I was interested all the sudden and her son was in it before I was, so I got to hear about it. It sounded really fun and there’s a lot of teamwork involved, and thought I could work on my teamwork skills.

The Sun: What were some of the difficult challenges you confronted?

KC: Well, getting out of my shell was definitely one. I’m not really a social person. With robots, sometimes, the battery runs out or problems with the connection between the server and the robot in order to make it move, sometimes that doesn’t work and we have to fix everything.

The Horizon Sun: Has it ever not worked during a competition?

KC: For a few seconds, and each competition is about a minute and a half.

The Sun: How long have you been with Team Caution?

KC: I’ve been with Team Caution since January. Their season starts in January and ends in May, but we have to finish the robot in six weeks in order to go to different competitions and compete.

The Sun: How did it feel when you won the championship?

KC: Oh, it was amazing, I never experienced something that awesome. Everyone jumped up and started cheering and it felt nice to know that I was a part of something. Even if it was the smallest things, I helped out with this.

The Sun: What are some of the features your robot had when competing?

KC: We had, like, tank treads and not a lot of teams had that, it’s kind of hard to explain the features.