The Eagles crushed the opposition in the championship game on Oct. 31. 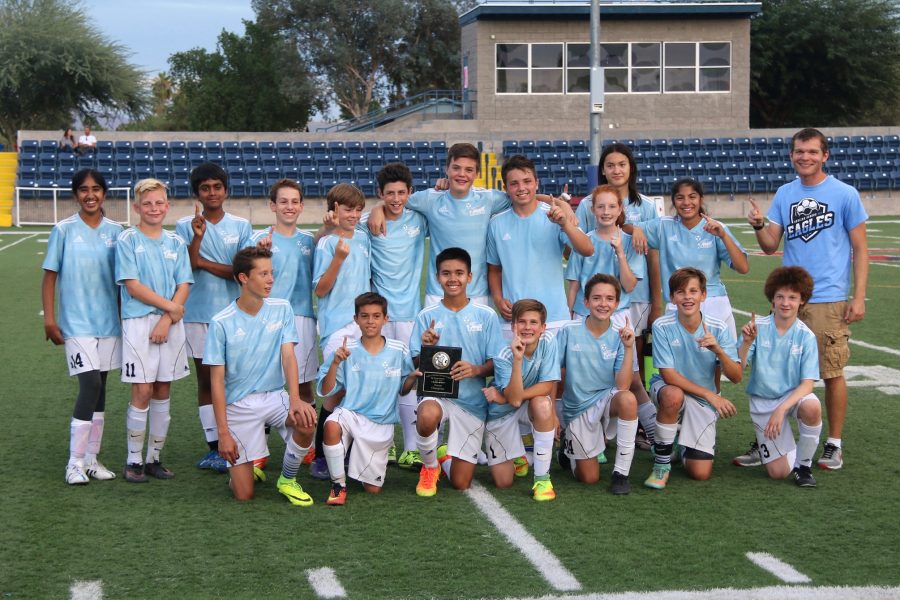 The soccer team poses with their first place plaque.

The Horizon Honors’ middle school soccer team won the championship game against Scottsdale Christian Academy 2-0 on Monday, Oct. 31. Heath Leonard, seventh grader, scored a goal with an unstoppable rush in the first half, and William Armstrong scored with an expertly placed penalty kick in the second half. Despite it being Halloween, the Eagles were focused and played their best.

In a previous game, the Eagles were defeated by Scottsdale Christian, mainly due to a player who scored most of Scottsdale Christian’s goals. “We could have kept players in different spots,” said eighth grader Anthony “AJ” Freithoffer. In the finals, two defenders were kept on him at all times, contributing their success.

All in all, the team agrees it was a great season. “I think we have grown closer together as a team,” says Freithoffer. “We are unselfish, and we don’t get sad when we lose. We also don’t foul that much. I hope the team can keep the streak next year.”

Seventh grader Noah Molinar says, “I enjoy playing soccer at Horizon [Honors] because I get to be active with my friends and have fun in an intense way.”

The team has a record of 12 wins and only one loss, and is now number one for the second year running. Everyone agrees that the team did an amazing job.

Congratulations to all of the players on the MS soccer team and a special thanks to coach Scott Evans for a successful season.