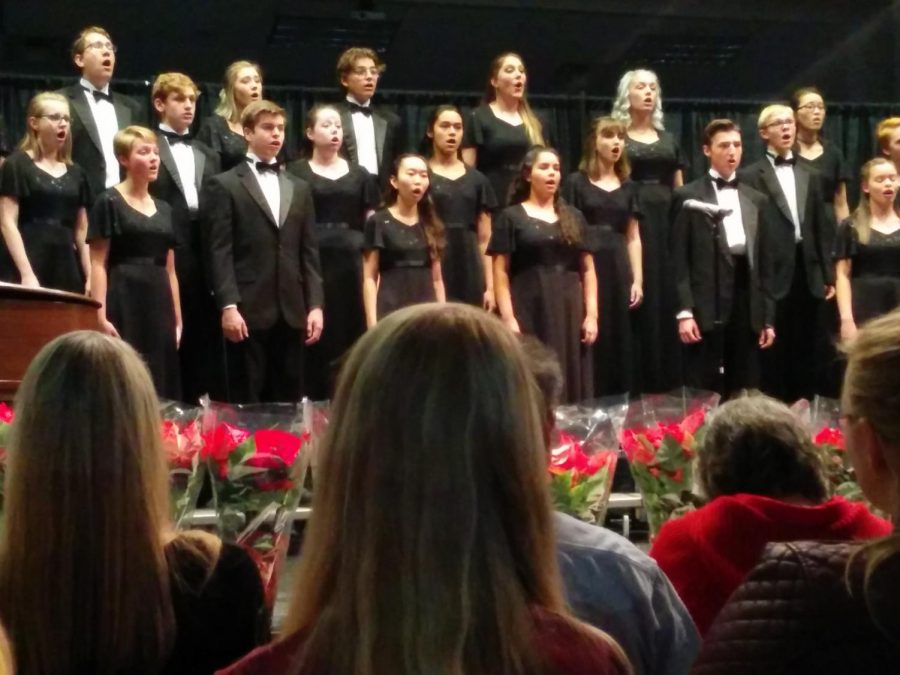 Beautiful voices rang out in the multipurpose room as the Horizon Honors “Songs of the Season” concert began. Bella Voce started their concert off by surrounding the audience and beginning with “Sing We Now Noel!”, moving onto the stage as the song progressed. The piece was extremely pretty, and the flute, played by Bianca Pizorno, senior, added a nice touch too. They then sang “Kol Han’shamah,” which turned out to be a cheery song with skilled harmonies throughout the piece. “A Ceremony of Carols” was next. It included two pieces, “Balulalow” and “This Little Babe.” The two songs contrasted each other; “Balulalow” sounded haunting yet lovely, featuring a powerful solo by Gracie Gamble, eighth grader, while “This Little Babe” used fast-paced rounds to give it an exciting feel. Gamble thought her solo went “relatively well”, and she “[loved] being up on stage.”

The eerily beautiful “Candles In December” came next, followed by the classic “Last Christmas” with two solos from Isabella Pizorno, eighth grader, and Elizabeth Fear, freshman. Bella Voce wrapped up their concert with “Carol of the Bells,” a favorite of Gamble. The traditional song was a great way to end their “really good” concert, as stated by Bonnie Wanstreet, eighth grader, and transition to the next group, Cantabile Honors Chorale.

After Bella Voce departed off of the stage, the black-clad Cantabile Honors stepped up onto the risers. Their concert began with “Ding-a Ding-a Ding.” The song is a classic for the choir, but was performed with a modern twist on it. Burke Wood, junior, skillfully took the role of a beatboxer, giving the choir an unusual form of tempo to sing along to. After this number, the choir sang “S’vivon,” a traditional Hebrew song, which had a folk-like tune and was fun to listen to. “I Wonder as I Wander” and “The Holly and the Ivy” came next. “I Wonder as I Wander” starred Stephanie Clark, junior, as a soloist, and together she and the background voices gave the gorgeous song a somewhat solemn mood. “The Holly and the Ivy” on the other hand, was happy and upbeat thanks to the maraca add-on. Their following number was “Baloo Lammy,” a calming and fitting song for the choir. The peaceful “Winter’s Heart” came after. This song was mellow and soothing.

Finally, the ending piece came: “Sleigh Ride.” As a tradition, Cantabile Honors invited alumni to sing along in “Sleigh Ride.” A large group of alumni were able to attend this time, one even virtually attending via FaceTime. The final song was fun to watch, and included dance moves and props that made the performance a great way to bring an end to the 2017 winter choir concert. Seniors Ella Coste and Sammi Tester thought the concert went well. Tester enjoyed “Winter’s Heart,” and stated that the concert went “better than we were expecting.” Coste’s favorite was “S’vivon.” She commented on the choir’s performance as well, saying, “Our singing was really good, there was just a couple of mix-ups on where we were supposed to go onstage, but we all laughed so it was good.”

Both choirs did an incredible job in their concerts. Their songs were amazing to listen to, whether they were calm, exciting, or solemn. The students in our Horizon Honors choirs are truly skilled, and will continue to perform beautifully as they are sent to the Capitol. If you’ve got the time and enjoy phenomenal music and voices, be sure to come listen to and support future choir concerts.