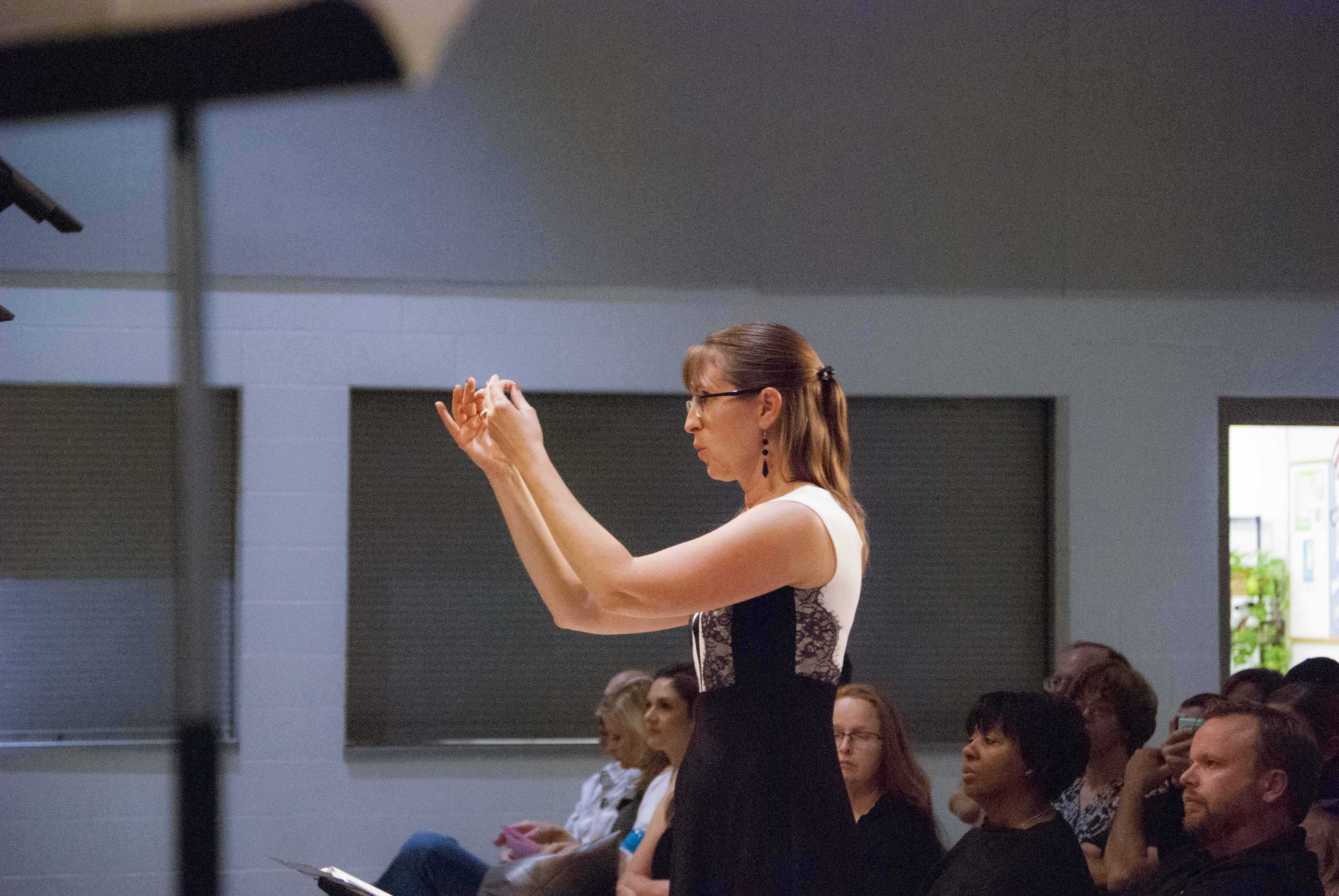 VanderLey conducts as Bella Voce sings songs of the heart.

VanderLey conducts as Bella Voce sings songs of the heart.

The Horizon Honors’ choirs performed on Tuesday, Mar. 1. Themed “Songs of the Heart,” the students all impressed the audience and performed a multitude of pieces.

On Tuesday, Mar. 1, at 6 p.m., Dolce Voce and Magnum Chordum were introduced by Cori Jo VanderLey, the director of the students. The seats were filled with family and friends. VanderLey explained how the concert was themed “Songs of the Heart,” which meant all of the pieces were about love and romance. With little introduction, the students began singing “I Heard It Through The Grapevine.” The piece was peppy, describing the story of someone who wanted a girl to be theirs. The student performers snapped along as they sang to add a beat.

Next up was “That’s Amore,” a joking song that made light hearted jokes about being in love. The accompanying piano wrapped up the song nicely. After “That’s Amore,” “Down in the Valley” began. This piece was much slower, and the piano rang out with soft chords as the song detailed missing a loved one, who had left the valley and moved elsewhere. Elegant harmonies mixed to create the piece. The two choirs finished with “Don’t Go Breaking My Heart,” a pop song that the students obviously enjoyed singing, with students smiling and rocking more to the beat.

They finished their performance with hearty applause, then Bella Voce stepped up to the stage and started their performance with “Nesta Rua,” a Brazilian folk song that started slow and picked up speed. It took on a funkier melody that did sound Brazilian in tune. The harmonies were entertaining and intriguing, They performed without a hitch, then it flowed into “Sigh No More, Ladies.” This song has lyrics from Shakespeare’s “Much Ado About Nothing.” The students performed in rounds, mixed with stunning harmonies, the bright and cheery song was quite entertaining. Next was “Love Learns By Laughing,” a short a cappella that was well-performed and included sharp harmonies that worked well.

Up next was “The Mermaid’s Lament.” True to the name, this song was enchanting and haunting, singing of a lost love that disappeared under murky seas. The mermaid’s grief was evident in the students’ voices, and the power behind their words was mastered.

Then, “I’m Not That Girl” featured eighth grader Kate Allen as the soloist, and her voice matched the theme of the song – a girl wishing a guy would love her, and yet she’s not the type of girl he looks at. They closed out the night with “You Can’t Stop the Beat,” another peppy song that relied heavily on alto voices. It was a great ending for their performance.